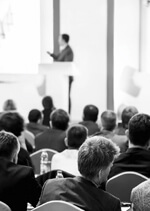 This publication is a combination of three policy papers commissioned by the Netherlands Institute for Multiparty Democracy in cooperation with the European Partnership for Democracy. The content is devoted to the issues of political party finance, local self-government and women’s participation in politics. These topics are at the centre of policy debates in Georgia.

Ketevan Bolkvadze’s paper draws the comparison of Armenian and Georgian system of political funding and provides recommendations on how they can be reformed. Nino Kakubava and Tamunia Chincharauli analyze legislative and institutional aspects of participation. Rusudan Kervalishvili’s paper is about women’s engagement in peace and security. It goes through the international obligations of Georgia and draws recommendations on how to better materialise them.

The policy papers are based on research carried out by professionals of relevant fields and address three critically important challenges of the current Georgian politics. 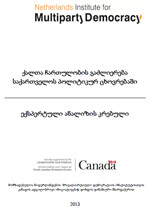 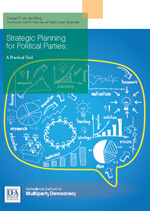 The experiences of the NIMD work in party development in Georgia were summed up in the publication created jointly by the NIMD and International IDEA for the purposes of their further use in the program countries of the two organisations.

This Strategic Planning Tool for Political Parties is a contribution that parties around the world can use in their attempts to further gain the interest and trust of citizens. In this tool, which was first successfully tested by the Netherlands Institute for Multiparty Democracy (NIMD) in its programmes in Georgia and Mozambique, NIMD hopes that political parties will find a resource to improve their public standing as well as their chances at electoral success. This tool is intended to guide political party assistance providers in helping political parties set up and carry out strategic planning processes. It offers an approach to, and guidelines for, the practice of strategic planning aimed at systematically strengthening parties’ organisational capacities. Electoral campaigning strategy is one aspect of a party’s organisational functioning, but by no means is the core issue in organisational strategic planning. 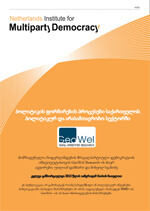 This publication (Georgian & English) reflects research methods, approaches and traditions guiding the policy formation in Georgian political parties. The nature of the process, in which political parties shape their ideas into programs, has a considerable impact on the functioning of nation’s political system. Intra-party discussions, research, systems of planning and analysis, monitoring and evaluation of policies or, their absence, have strong influence on the workings of individual political parties as well as national politics.

This research assesses several dimensions of policy formation. First and foremost, NIMD is interested in the intra-party mechanisms (if any) for developing political programs, the extent to which policy formation is institutionalized, democratic and effective and when this is not the  case, we tried to see as to what are the obstacles that need to be overcome. This research also looks at the capacities that exist in Georgia’s non-profit, research sector to aid political parties in this work and the methods and resources that are being used in communicating policy ideas to the public.

The papers look at key aspects of intra-party democracy and local governance and address issues important to Georgia’s democratic development.  The lack of democracy and transparency in and of political parties as an important inhibition to party’s efficiency and effectiveness and being in opposition to the general principles of democracy. Parties that are not democratic themselves cannot build democracy for the state. Therefore, NIMD emphasises the importance of an intra-party democracy in Georgian political parties.