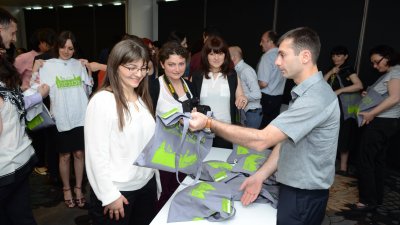 The main topic of Democracy Boot Camp in 2015 concerned with the issues of urban development and city planning. A week long agenda included an intensive teaching on the meaning of development, as well as on the role of urban development specifically in the context of a social-economic development. Further issues discussed were the peculiarities of the city planning and the successful examples of mitigating concomitant problems.

Throughout the week, the boot camp hosted the lectures and trainings delivered by the field experts. The mayors invited from the seven cities of the Netherlands shared their experience with the participants.

Based on the sessions and by considering the peculiarities of their own cities, participants of the boot camp, together with the city mayors and the representatives of the city councils, discussed various city concepts. The mayors of Dutch cities were also actively engaged in the workshop. The boot camp concluded with the presentation of the plans for the development of Telavi, Gori, Kutaisi and Batumi.