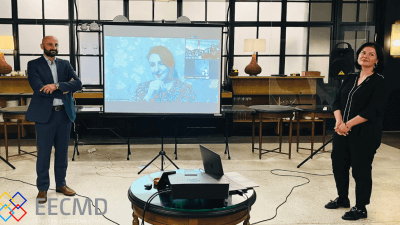 Winners of the “Democracy Leader” award are Ana Baliashvili and Tiniko Khanjaliashvili.  The award was initiated by the Eastern European Centre for Multiparty Democracy (EECMD) in 2015. Every year the organization distinguishes among graduates of Democracy School and handles the Democracy Leader Award to a person who has shown exceptional courage, determination and characteristic of a leader in strengthening and promoting democratic values, human rights and equality.

Ana Baliashvili – is a second-generation graduate of the Gori Democracy School, journalist, civic activist and politician. Her work experience includes the public, private and non-governmental sectors. Ana has six years of working experience in the Kareli local self-government, where she headed the public relations and culture service. She worked for the Women and Development Association, where she oversaw public relations for several projects involving women in politics. Her working experience in the media is connected with the TV-radio company “Trialeti”, where besides being a journalist, she also held the position of an executive director. Anna’s civic activism is mainly linked to protests against the occupation and pro-Russian sentiment and has initiated several demonstrations against transferring of municipal lands to organizations associated with Russian companies.

In the 2021 self-government elections, Ani was elected as a member of the Gori Municipality from the proportional list of the United National Movement (UNM).

Tiniko Khanjaliashvili – is a second-generation graduate of the Telavi Democracy School. Tiniko has many years of work experience in the field of education. She has worked as UNDP Programme Manager in Pankisi and USAID G-3 Programme Manager in Kakheti. She is a member and trainer of the Association of Self-Governments NALAG. Tiniko has also been a consultant to various international organizations in Kakheti, including GIZ, CENN, UNDP and others.
Furthermore, she also has experience working in the private sector. In recent years, Tiniko has been the Deputy Director of Kachreti Vocational College “Aisi”, the Head of the Kindergarten Agency of Telavi Municipality, from 2019 to present, the Head of DMO Visit Kakheti. Together with other graduates of the School of Democracy, she is the founder of the non-governmental organization “Kakheti Civic League” and has implemented several projects in the community inhabited by local and ethnic minorities. Tiniko has extensive experience in activism related to the civic integration of ethnic minorities, women’s and children’s rights issues, European integration, and strengthening the institution of self-government.

In the 2021 municipal elections, Tiniko was elected as a municipal council member from the “Georgian Dream-Democratic Georgia” proportional list.

In the face of today’s party controversy, handing over the award to 2 opposing political parties, represented by Ani and Tiniko, we emphasize the importance and opportunities for compromise and political coexistence.

The announcement of the Democracy Leader 2021 was part of the closing ceremony of the 10th anniversary of the Democracy School. For Ani and Tiniko, receiving the award was unexpected and very emotional.

The Democracy Leader award was initiated to express support and recognition towards local democracy activists who contribute to strengthening principles of democracy in Georgia. EECMD aims to encourage Democracy School alumni to use their knowledge and skills gained through Democracy School educational programs and become more active citizens.