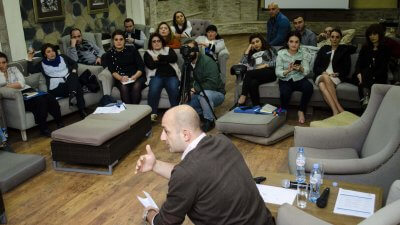 The EECMD Democracy School is an intensive, non-formal educational program for the representatives of the local self-government bodies, civil society organizations, the media, political parties and academia, as well as students and active citizens interested in contemporary issues of democratic politics.

In this program, EECMD relied on its and NIMD’s decade-long international experience, as well as on the knowledge of international or local experts and practitioners.

The Democracy School project was launched in Telavi in Autumn 2011. After successful completion of the project, the geographic area of the program has been expanded. In January 2012 Democracy Schools started functioning in Kutaisi and further extended to Gori and Batumi in the fall of 2012. Since 2017 two cities of Ukraine Lviv and Odessa were added to the list.

The participants of the five-month educational program deepen their understanding of the key concepts of democracy, expand their analytical capacity and gain relevant skills that will help them make effective changes in society.

Apart from its educational component, the Democracy Schools serve as a civic clubs which allows the graduates to take part in the small grants competition, joint conferences and other important events organized by EECMD. The graduates of the school form the alumni network, which now has more than six hundred members. This is a growing community, which works on the practical projects of public importance through the means of informing the public on the local and national level and implementing advocacy campaigns.