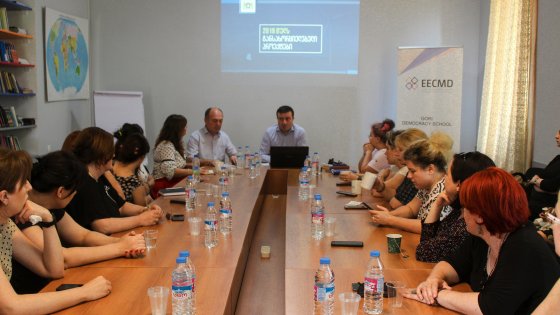 On June 19th, 2019, the Eastern European Centre for Multiparty Democracy (EECMD) invited Mr. Giorgi Khojevanishvili, the State Representative – Governor of Shida Kartli Gorge, to present a report at the Gori Democracy School. The meeting was attended by the alumni and students of Democracy School, as well as by the representatives of local non-governmental organizations, public institutions and media.

According to the governor, the most important thing for him is having a permanent communication with society, listening to their concerns and initiatives, and presenting the results of his work. After discussing concrete examples, the state representative overviewed planned and  implemented projects within all four Shida Kartli municipalities. Projects include: village support program, building multifunctional shelters for animals, reconstructing roads and bridges, as well as building 3 new kindergartens, 6 new public schools, a professional education center and a techno park in Kaspi.

Mr. Khojevanishvili then overviewed the ongoing and planned regional projects to develop agricultural, tourist, medical, cultural and sport infrastructures. He talked about improving conditions for internally displaced people and assisting families residing near the occupation border lines. The state representative informed the citizens that Gori Fortress had been transferred to Gori municipality, and the reconstruction process had already started.

Mr. Giorgi Khojevanishvili thanked EECMD and CENN, as well as the alumni of the democracy school for their support and engagement in cleaning up the forest close to the village of Uplistsikhe. More importantly, the governor identified the legal status of the forest territory and addressed the responsible entities to register the forest as the property of the municipality. This will assist in implementing the democracy school alumni’s initiative (turning the forest into a recreational and tourist center) into practice.

The presentation was followed by discussion, during which the state representative provided detailed answers to questions and described his points of view on every important issue, such as: constructing public toilet facilities for tourists and citizens, supporting agricultural tourism, the condition of the newly built sport palace in Gori, the low number of public libraries, the necessity of rehabilitation of several public schools (in the villages of Skra, Khurvaleti and Berbuti), preserving and rehabilitation of cultural heritage (Surami Fortress; Atenis Sioni) and museums, functioning  of community centers located in IDP settlements; the necessity of adopting a strategic plan for tourism development and planning relevant tours routes, and adapting city for disabled persons.

After the discussion, the state representative declared his willingness to further participate in such meetings and discuss citizen initiatives.

The meeting with the state representative Governor of Shida Kartli Gorge was organized by EECMD with the aim of increasing the accountability of elected officials, improving the quality of communication with citizens, and developing transparent democracy. At various times, the Democracy Schools were visited by city mayors, governors, chairmen of Sakerbulo, and other officials in all five cities.