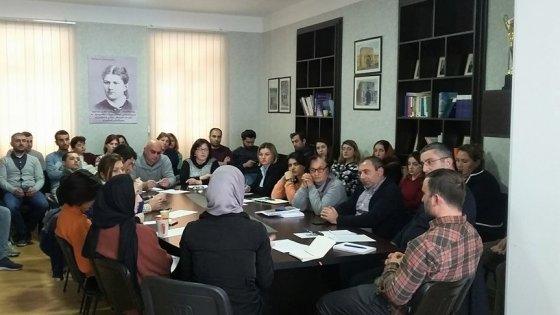 On January 24, 2018, the Eastern European Centre for Multiparty Democracy (EECMD) organized the meeting in Telavi between youth from Pankisi and representatives of civil society.

Democracy school graduates from Pankisi, together with other participants of the meeting, discussed the issues related to their integration and civic engagement. Moreover, recent developments in Pankisi gorge as well as the needs and interests of the youth were at the centre of discussion.

One of the speakers of the meeting, democracy school graduate Shengeli Tokhosashvili, overviewed the political, religious and civic state of affairs in the gorge and discussed the causes and triggering factors of youth emigration. In his view, the unemployment problems in the gorge as well as the social-economic background are the major drivers of emigration, especially the emigration of youth. Shengeli Tokhosashvili also discussed various religious communities in Pankisi and the role of Council of Elders in the gorge.

Melsi Bagakashvili, the founder of the non-governmental organization “Pankisi Youth Centre”, drew attention to the issue of political instrumentalisation of Pankisi and overviewed ongoing processes within the gorge as well as the state policies towards Pankisi. Furthermore, she discussed the dangers of marginalizing the Salafi community and the formation of negative stereotypes towards them within the Georgian society.

Speakers emphasized on the important role of the media and pointed to the fact when, more often than not, the media portrays the Pankisi gorge as the source of threat and destabilization, which deepens alienation between Kist community and rest of the Georgian society.

Yet another graduate of Telavi democracy schools, Luiza Mutoshvili, talked on the ways of ensuring civic and political engagement of the youth. In her view, a number of projects, directed towards youth engagement and empowerment of women, are being implemented in the gorge, although, due to certain reasons, the representatives of Salafi community often refuse to take part in the public processes.

During the meeting, participants underlined the need of implementing joint cultural and other kind of projects, which will, on the one hand, contribute to breaking the stereotypes related to Pankisi and, on the other hand, increase the touristic potential of the region.

The meeting was quite fruitful not only in terms of information sharing, but also in terms of proposing concrete initiatives aimed at ensuring future cooperation among the Pankisi youth, local self-government and civil society.

A number of initiatives and already implemented programs of our organization serve the purpose of ensuring the civic integration of national minorities and their engagement into the political life of Georgia. Using such spaces and opportunities is always step forward in terms of bringing different groups of society together. Therefore, EECMD will continue to organize various meetings and discussions of this nature throughout the country.