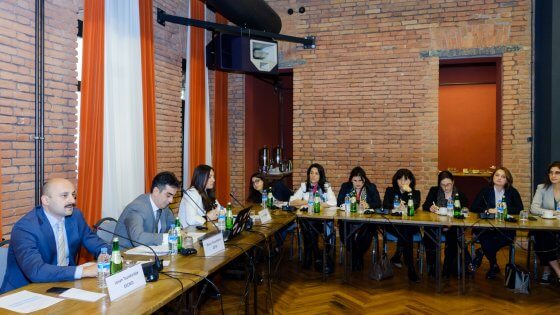 The first Ranking of Gender Equality among the Political Parties of Georgia was produced by NIMD in 2014. This is the third Ranking and it encompasses the year of 2017.  The methodology has been refined and modified in a manner to allow the meaningful assessment of the developments since 2014.

The composite index, expressed in percentage points, is comprised of the three original components where electoral dimension contributes 50% to the aggregate score while each, institutional and programmatic dimensions contribute 25% to the total. The electoral dimension has a higher score because it is considered that in a democracy the elections are the most important instrument that allow for the exercise of the ultimate power.

Five political parties were selected based on their performance during the local self-government elections of 2017, which managed to overcome the threshold of 3%. These political parties are: Georgian Dream (GD), United National Movement (UNM), European Georgia (EuGeo), Alliance of Patriots (PA), and Labour Party of Georgia (LAB).

The electoral dimension took into account three components of the local self-government elections of 2017: mayoral, proportional, and majoritarian elections and assessed the ratio of women among the proposed candidates and looked at the ratio of women elected. Here the Labour Party scored the best with 34.6% while all the others outperformed the governing party, Georgian Dream, which received 21.61%.

The institutional dimension was evaluated according to the gender equality activities that party undertakes, budgetary allocations for gender equality issues, ratio of women in the governing bodies, and the existence of gender/women’s rights units in the party structure. In this dimension Georgian Dream again received the lowest score of 15.63% and the best performer was the Labour Party with the score of 34.5%.

The programmatic dimension examined two major indicators: the gender equality measures adopted by the party through bylaws, regulations or other mandatory documents, and the presence of gender equality agenda in their electoral platforms. The results here show that except United National Movement none of the political parties mentioned women rights or gender equality issues in their respective programs, and only Georgian Dream and European Georgia explicitly committed to having the women’s affairs department in their bylaws.

Overall ranking established the UNM as the leader with the aggregate gender equality of 29.3%. The governing party, GD occupies the last position with the overall score of 17.96%. The second place is shared by the European Georgia and Labour party with the same overall score of 25.93%, and the third place is granted to the Alliance of Patriots – 20.38%. See the full publication here.