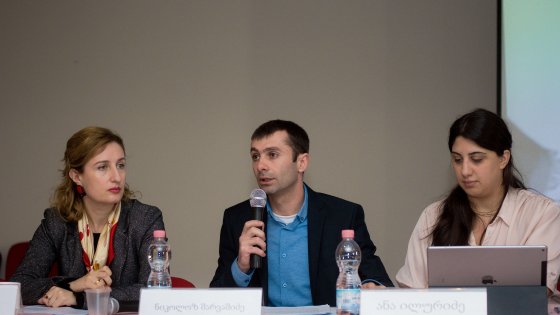 During February and March of this year, EECMD hosted a series of events aimed at informing the public on the importance of equality in politics and gender quotas. The meetings were preceded by the discussions around the draft law that has been initiated in the Parliament of Georgia and which envisaged amendments to the Electoral Code of Georgia and the introduction of 50 % gender quotas in the political party list under the proportional electoral system. The draft law, authored by the task force on women’s participation in politics and initiated by more the 37 000 voters, was rejected at the first hearing by the Parliament of Georgia. Despite this, discussions around the issue continue and the Democracy Schools further plan to hold thematic meetings and campaign events.

Considering the fact that women represent 52% of the population of Georgia, their representation in the elected and appointed public offices is very low. Out of 150 member of the Parliament, only 16 % is women, while on the local level only 13 % holds the elected positions. Out of 64 municipalities in Georgia, only one has the woman mayor.

According to the changes to the Constitution of Georgia adopted in 2017, the state took the obligation of eliminating inequality between men and women and ensuring real equality by taking extraordinary steps. Furthermore, under the various international conventions, Georgia has taken commitment to ensure gender equality.

Discussions held in four cities of Georgia – Batumi, Kutaisi, Gori and Telavi- were attended by representatives of civil society, politicians,  majoritarian MPs and their staff members. Understanding the views of the  MPs in relation to the issue and their engagement in the discussions were critically important. Each of them remarked that they supported the draft law on gender quotas.

During the discussions in Telavi, the member of the Parliament, Irina Pruidze, addressed to the audience. She particularly emphasized that the draft law on gender quota is temporary mechanism to achieve gender equality, and is an internationally accepted practice: “At this stage, it is important for Georgia to introduce gender quota mechanism in order to achieve equal political opportunities. It is also important to raise the awareness in this regard in order to avoid discussing quotas without fear. “

One of the speakers of the discussion in Batumi was the member of Adjara Supreme Council, Nino Chkhetia, who heads the Gender Equality Council. Ms.Chkhetia remarked that there is a difference of opinion within the government regarding the draft law and that there is no agreed positions on the subject. She further remarked that “due to the fact that political culture is masculine, it is better to respond to it with categorical mechanism, that is by adopting gender quota law”. Nino Chkhetia also pointed out that the same initiative will also be introduced in the Adjara Supreme Council.

Ida Bakhuridze, member of the Task Force on Women’s Political Participation,addressed the audience during the meeting in Gori. According to her, introduction of the gender quotas is very important in order to really increase women’s political participation, and the Parliament of Georgia should seize this historic chance.

Speakers of the discussions and other participants focused on various aspects related to the issue. Among them were the history of quotas and the experience of developed countries; women’s engagement in the Georgian politics and worrisome tendencies in this regard; the state of women’s rights in Georgia and the benefits of gender quotas in addressing the problem of inequality.

Participants of the meetings also discussed the arguments taken by the opponents of gender quotas. It has been pointed out that an artificial nature of quotas is often criticized, although due to the fact that throughout the centuries equality could not have been established through non-artificial means, developed countries decided to tackle the problem via introducing temporary mechanisms. In case of Georgia, achieving full equality without introducing gender quotas or such mechanisms will take decades, and would hence impede the development of the country. Discussions also centered on the public, social and economic barriers faced by women when deciding on entering the politics.