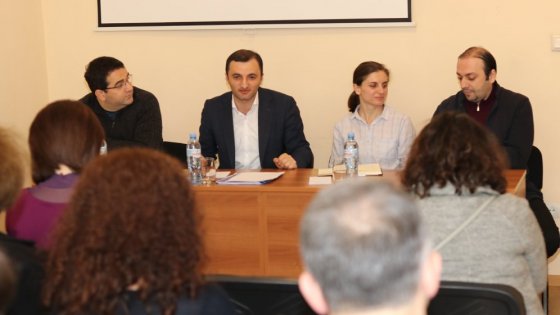 On February 8, 2018, amendments to the Constitution of the Autonomous Republic of Adjara were discussed at EECMD’s Batumi Democracy School. The members of the constitutional commission and the students of Batumi democracy school discussed the amendments that will enter into force in due time.

The following individuals were invited as the speakers of the meeting: Davit Gabaidze, Head of Ajara Supreme Council, who is also head of the constitutional commission; Petre Zambakhidze, the opposition member of the commission from the political party ‘European Georgia” and Archil Khakhutashvili, Executive Director of the non-governmental organization “Democracy Institute”.

Davit Gabaidze has positively assessed those amendments that enable the Autonomous Republic of Ajara to manage the natural resources (water, forest, land) and strengthen the mechanisms of accountability of Ajara government to the Supreme Council. According to the new amendments, the autonomous republic will be able to initiate structural changes at the local level, including appointing ministers and creating new ministries. To the questions of the audience- whether the creation of the new ministries is planned- the speaker replied that no such changes are foreseen.

During his speech, Petre Zambakhidze focused on the electoral system and pondered why the issue of abolishing majoritarian system has not become a part of the public discussions. He also remarked that current constitutional project decreases the powers of the Autonomous Republic of Ajara and the issues such as cultural heritage protection, tourism, culture and sports, local constructions are omitted from the constitution.  Davit Gabaidze responded that these issues are beyond the powers of Ajara government as they fall into the powers of the central government or local municipality. Despite the clarifications, the issue triggered discussions in the audience.

According to Archil Khakhutashvili, even though numerous public discussions were held, questions arise whether these processes are mere formality or will they lead to actual change? In his view, discussions shall focus on the impact that the constitutional changes will have on the people.

Malkhaz Nakashidze, a constitutionalist and graduate of Batumi democracy school, remarked that the major trouble with the document is the lack of delegated powers to Ajara. According to him, the problem with the constitutional projects of both Ajara and Georgia is the process acceleration: “World practice shows that constitutions are not adopted this fast. It is important to have discussions with the public and various field specialists in order to decide, for instance, whether or not the issue of general education shall fall into the powers of Autonomous Republic of Ajara.”

During the meeting following questions have also been asked: why does the constitution avoid mentioning the eco-migration? Why it is not possible to constitutionally guarantee the protection of cultural heritage cites? Will the new constitution enable people to control the executive government?

Heated discussion unfolded during the meeting. The attendees remarked that it is important to have discussions of this kind on the constitutional amendment process, in order to identify actual problems and change constitution based on due public consideration.

The public considerations on amending the Constitution of Autonomous Republic of Ajara have been completed. The discussions moved to the Ajara Supreme Council. The local legislative body shall finalize the work on the constitutional project until April 20 and send the document to the Parliament of Georgia for further consideration.