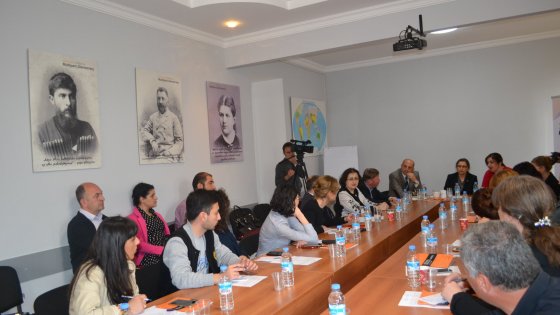 On April 13, 2018, Deputy Speaker of the Swedish Parliament (Riskdag), Esabelle Dingizian, has met with the graduates of the Democracy School. The meeting has centered around the issues such as civic engagement, gender equality and women’s political participation. The meeting has proved especially interesting for the Democracy School alumni as they learned more on the Swedish experiences regarding the topics discussed.

Levan Tsutskiridze, the Executive Director of the Eastern European Centre for Multiparty Democracy, opened the meeting and thanked Sweden for its support to Georgia’s sovereignty and territorial integrity as well as for the assistance that Sweden has provided for Georgia’s democratic development. He informed the members of the delegation about the organization and introduced to them the program of the Democracy Schools.

Ms. Dingizian discussed her visit to Georgia and shared her impressions with the audience. She further focused on the issue of gender equality and the Swedish experiences in this regard. Namely, how Sweden achieved gender equality and what mechanisms and regulations were used by the political parties to achieve and maintain the equality. According to her, it took almost 100 years to achieve gender equality in Sweden, therefore it is better for Georgia not to rely on the natural way of establishing gender balance and opt for the mechanisms such as gender quotas.

Deputy Speaker answered to the questions asked by the audience regarding the issues of Georgia’s democratic development, fight against the Russian propaganda, Swedish social system and the ways of Georgia’s development under the conditions of occupation. According to her, Georgia is a new democracy and achieving democracy is a long process, which requires an everyday struggle.

Ms. Dingizian also pointed out to the importance of civic engagement and accountability between politicians and the population, while she also brought the examples of her ways of communication with the voters. According to her, she communicates with the voters and the civil society on a daily basis and receives various letters and information, which, she believes, is a vital component of the democratic political culture.