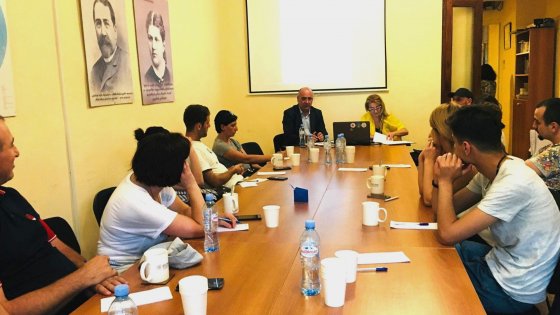 On June 20th, Mr. Suliko Tebidze, Chairperson of Batumi Municipal City Council, presented a report at Democracy School. He has been on this position since November 2017 and previously held the position of Minister of Education, as well as the director and teacher of a public school.

“I believe that the main goal of the city council is to serve as a bridge between the citizens and the authorities, and my initiatives aim to improve the quality of that communication”, – noted Mr. Tebidze. He also mentioned how he had canceled the scheduled weekly meetings with Batumi’s citizens, and instead let them meet with him on a daily basis. According to the chairperson, he met with more than 500 citizens in that manner. As Mr. Tebidze noted, they have also modeled the “Open Door Session” in order to discuss issues of public importance. The sessions are held by citizens and all high officials of the City Hall and City Council are present.

As for other initiatives, the Chairman of Sakrebulo has reduced the representation costs, instituting preferential tariffs in public transport for schoolteachers and technical personeel and decreasing the barrier on the electronic petition.

After a brief presentation of the Chairman, participants of the meeting asked questions regarding the petitions and failed initiatives, also, about Batumi airport transfer, prohibiting the usage of pyrotechnics, controlling the usage of fireworks by the city hall, the poor conditions of the public transport, the increasing costs of traveling by minibuses, the renaming of the streets, renewing and arranging bicycle parking lots.

One of the participants of the meeting, Mr. Davit Partenadze’s question raised the issue of Mr. Omar Makharadze, a member of the Sakrebulo. Mr. Makharadze, who was also a lecturer at the Batumi State University, was accused of sexual harassment against his student. He left the university and the post of chairman of the faction in the Council. Davit Partenadze asked the chairperson why Mr. Makharadze was not deprived from his mandate due to ethical concerns. Suliko Tebadze said that he cannot blame anyone on the grounds of suspicion: “Makharadze left the positions in the Sakrebulo, he is elected by the people and nobody will force him to leave the mandate, until the court finds him guilty.”

The Chairperson was also asked about the infrastructural and urban issues, such as blocking the pavements by the owners of café-restaurants and creating obstacles for pedestrians, controlling the level of noise in the city, unregulated outdoor trade on the beaches etc. Shalva Ilarishvili, asked the question on the construction lines in the coastal zone, which is implemented with the permission of City Hall and Sakrebulo. The Chairman’s response, that Batumi coastline is already distorted and the process started during previous government, was severely criticized by the audience. “We can continue making our city ugly then” – ironically remarked a civil activist and alumni of Batumi Democracy School, Ms. Irma Zoidze.

On June 20th, Batumi joined the wave of protests. Demonstrators protested Russian occupation and the Russian MP, Mr. Gavrilov, for sitting in the seat of the Speaker of Georgian Parliament. Suliko Tebidze strictly declared that he will never be in favor of Russian aggression and occupation; neither will he support the presence of Russian MPs in Georgian parliament. However, he didn’t mention anything about the reaction and actions undertaken by Georgian government in response to the protest. At the end the Chairman of the City Council noted that he had received valuable information and feedback from the citizens and he will visit democracy school again in the future to talk about other initiatives

Meeting with the Chairman of Batumi Sakrebulo was organized by EECMD with the aim to   increase the accountability of elected officials, improving the quality of communication with citizens and developing transparent democracy. At different times the Democracy Schools were visited by City Mayors, Governors, Chairmen of Sakerbulo and other officials in all five cities.