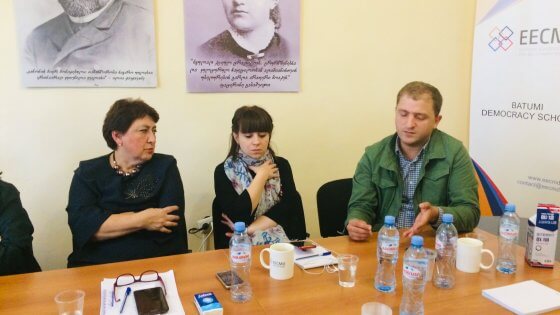 Chaotic construction processes and violation of the areas of historic importance has become one of the hottest and most-discussed issues in Batumi, recently. Well-known Batumi Boulevard, as well as the territory of Old Batumi and even the coastline of Batumi are in the center of attention of civil activists.

This year, September 28, the City Council of Batumi has supported an initiative to transform the recreation-resort zone of Green Cape Batumi into a business center. The initiative was based on the demand of construction company ‘Elite Construction Group’, which plans to build two 28-story buildings there.

On the other hand, civil activists and citizens are against such kind of changes and they believe, that construction processes in the coastline should be banned. According to their opinion, changing the status of recreational zone for even one building in Batumi Green Cape will have a continuous effect and the place will definitely lose its importance. They also state, that construction plans in the coastline is alarming as it will create a stone wall between the sea and the city. Civil activists highlight the importance of identifying the borders of historic parts of the city. They also believe, that construction processes in the historic part should be planned very cautiously and should be permitted as a result of public discussions. Members of ‘Batomi’, who’s main focus is on the protection of historic and cultural heritage organized an informative briefing and declared about the possible street protests.

In response to the ongoing situation, Batumi Democracy School organized a discussion and invited the members of the ‘Batomi’, as well as other civil activists, representatives of non-governmental organizations, members of Batumi City Council and members of the architectural department of the Mayor office.

At the beginning of the meeting, representatives of ‘Batomi’, archeologist Nino Inaishvili and journalist Irma Zoidze talked about the preconditions of their protest initiative. According to Nino Inaishvili, while identifying the borders of the historical part of the city, the Mayor did not pay attention to the scientific research conducted by the company ‘Geographic’. It is important to highlight the fact, that this research was conducted by the demand of the Mayor office and received quite good feedback from the society as well. But, instead, the Mayor office decided to artificially exclude the territories of Riviera and Dolphinarium from those historical borders and plan to construct multi-store buildings there. On the other hand, Irma Zoidze declared, that taking such kind of decision without a consent of the citizens and civil society representatives means breeching of the principle of open governance and roughly violates the law about the self-governance.

According to the head of Architecture and Urban Planning Department, Mirian Metreveli, Mayor Office has obeyed the law and posted the information about the decision on their official website, as well as in the newspaper ‘Adjara’. He also noted, that Mayor Office do not have an obligation to organize public debates regarding such decisions and if the civil society representatives are interested in the development of the situation, they should catch their eyes on the news. Such statement made by the Architect was followed by heated protest from the side of other attendees, claiming, that the Mayor office pays absolutely no attention to the public opinion.
One of the participants of the discussions, ecologist Nodar Chkeidze mentioned, that the citizens of Batumi wish to live in a secured and peaceful environment. ‘We have better not to use the coastline for constructing buildings and opening restaurants“ – Mr.Ckheidze declared. The meeting was also attended by the members of City Council. Representative of Georgian Dream political party, Natalia Zoidze suggested, that the main problem is caused by the inexistence of General Plan of the city, which needs certain time to be adopted and is very important for the investors as well. On the other hand, the civil activists believe, that City Council is artificially consuming more time in order to meet demands of certain individuals.

Representative of the United National Movement, Mirdat Kamakhadze noted, that the case of Green Cape directly adjusts to the interests of certain company, which is quite inexperienced in such construction projects and it definitely sounds doubtful. Representative of Transparency International Georgia in Adjara, Malkhaz Chkadua agrees with Mr. Kamakhadze and states, that he is engaged in a legal investigation process of this case, together with GYLA.

At the end of the meeting, the civil activists, members of ‘Batomi’ and others participants declared, that they will always make clear positions against such kind of decisions and together with the citizens of Batumi, protect their city from becoming a ‘jungle of stones’.