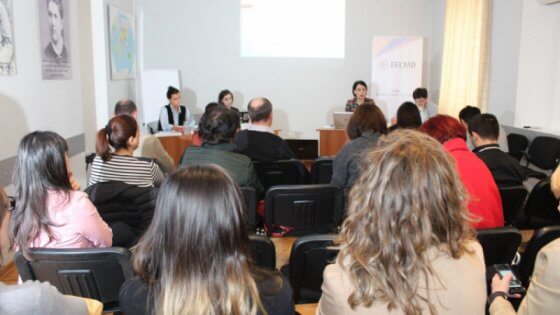 The Open Society Georgia Foundation and the Eastern European Centre for Multiparty Democracy (EECMD) jointly organized a series of meetings at the Democracy Schools in Telavi, Gori, Kutaisi and Batumi. During the meetings, the report on the implementation of Georgia’s reform commitments under the Association Agreement with the European Union has been presented to the audience.

The Association Agreement, signed in 2014, between Georgia and the European Union envisages the implementation of systemic reforms in various sectors. Civil society organizations are actively monitoring the process of the fulfilment of the commitments undertaken by Georgia under the Association Agreement. The report covers the following issues: labor rights and standards, rights of children, fight against corruption, environmental protection, equality and justice.

During the discussions, the speakers overviewed various phases of implementation of the commitments undertaken by Georgia, and discussed already implemented and planned reforms. Moreover, the policy recommendations presented by the civil society organizations aimed at addressing the challenges identified during the process have also been explored.

On the issues related to labor rights and standards the presentation has been led by the representatives of Human Rights Education and Monitoring Center (EMC). The presentation focused on Georgia’s commitments under the Association Agreement to improve and uphold the safety and labor standards. The representatives of the organization Green Alternative emphasized on the need and importance of sustainable use of natural resources, increasing government transparency and improving citizen engagement.

The representatives of Transparency International Georgia stressed the importance of fighting against corruption at the elite level and addressing the misuse of power by the authorities with the aim of securing private gains. The speaker from the Georgian Young Lawyers’ Association drew attention to the issues of justice and the challenges that are pervasive in this regard.

On the issues of equality and rights of children presentations have been led by the representatives of Union Sapari and Partnership for Human Rights.

Meetings were attended by the graduates of democracy schools, the representatives of local municipality, journalists, non-governmental organizations and other interested members of the public.