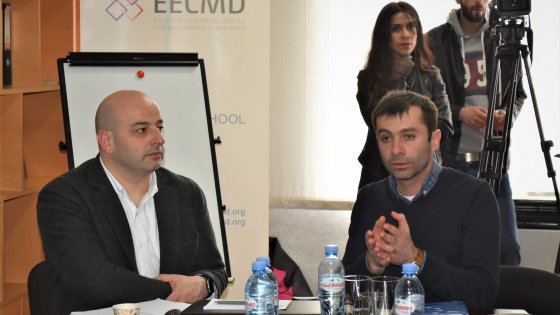 Upon the initiative of the Eastern European Centre for Multiparty Democracy (EECMD), mayors of Kutaisi and Telavi municipality presented the summary of the activities and projects implemented during their First year in the office. Mayors’ visits to the Democracy Schools turned to be quite interactive and useful.  Such meetings were organized last year as well, when the mayors presented reports on the first 100 days in the office.

Mayor of Telavi, Mr. Shota Nareklishvili presented detailed report about ongoing and implemented infrastructural projects, information about protection of monuments and cultural heritage, social and healthcare programs, local and international festivals, development of tourism and etc. According to Mr. Nareklishvili, the budget of Telavi municipality for 2018 was 26 million GEL, out of which 13.8 million was spent on infrastructural projects.  However, as the mayor noted, the budget for infrastructural projects was not fully spent last year: “We are already working to plan projects, announce tenders and implement them in a timely manner.”  In addition to it, the functions of the supervisory service of the City Hall have become stricter, as a result of which all the entities in the city using the pavements will receive warnings and fines.

After the presentation Mayor answered the questions of the auditorium.  One of the participants  raised the issue of  Telavi Land Use Master Plan, in particular, at what stage is the development of the Master Plan and how soon will it be approved. The Mayor responded that the company that won the tender, has already completed the work and expressed his hope that by the end of the year Sakrebulo will approve the document. He also noted, that the permit on several large-scale constructions was not issued, even though Master Plan is not approved yet.

Mayor of Telavi also highlighted the importance of citizen engagement and initiatives in the work of municipality: “We plan to create a format “My Idea to Telavi Mayor” which will grant citizens an opportunity to share their recommendations and ideas with the mayor.” In addition to it, an advisory board to the City Hall, as well as different thematic professional advisory boards will be created, which will largely involve citizens.

Mayor of Kutaisi municipality, Mr. Giorgi Chigvaria was also asked a number of questions regarding the infrastructural projects during his presentation in Kutaisi Democracy School. The participants of the meeting were interested in the rehabilitation of the “white bridge”. The mayor admitted, that the company failed to fulfill the terms of the contract and therefore was imposed sanctions and penalties.

Other questions raised the problems of public transport. The only available municipal transport for Kutaisi residents is a mini bus, thus the population of the city are unable to enjoy the advantages of public transport and benefit from social packages. According to Mr. Chigvaria, they are already working on this issue and negotiations with various institutions, including the European Bank for Reconstruction and Development (EBRD) are ongoing.

The audience was especially interested in social projects. As the mayor declared, budget spending for social projects was increased in 2018 and 2,820 citizens have benefited from the medical assistance program. Overall, citizens received 710 thousand GEL as a co-financing. During the presentation the Mayor also talked about the ongoing and future projects implemented in Kutaisi. According to the report, the rehabilitation and construction of 141 infrastructural objects have already been completed, with the expenditure of 5.6 million GEL from municipal budget. Several thousand GEL was spent on the rehabilitation of elevators, entrances, football pitches, as well as on reconstruction and building of new kinder gardens.

The meetings at Telavi and Kutaisi Democracy Schools were attended by the Democracy School alumni, representatives of local organizations, active citizens and journalists.  Eastern European Centre for Multiparty Democracy always focuses on organizing meetings between citizens and the local authorities in order to strengthen accountability, transparency and support establishment of participatory democracy.  City Mayor’s visits are planned in Batumi and Gori Democracy Schools as well. 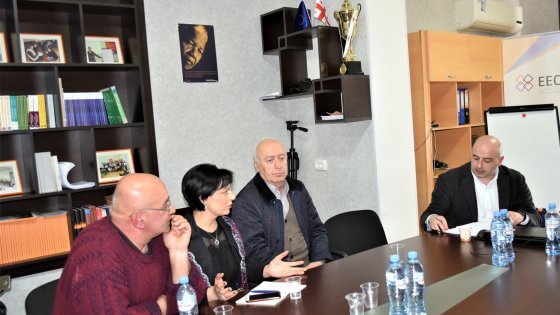 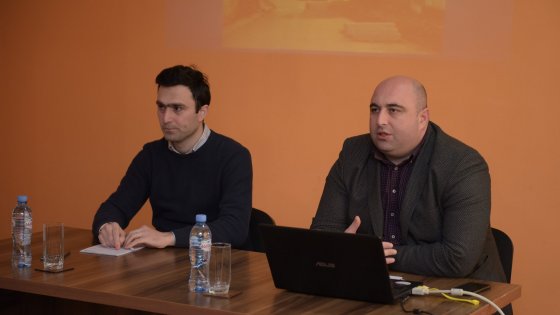 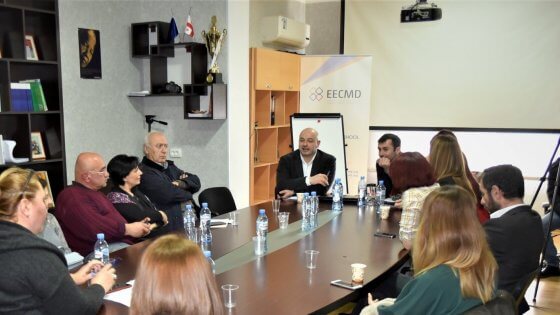 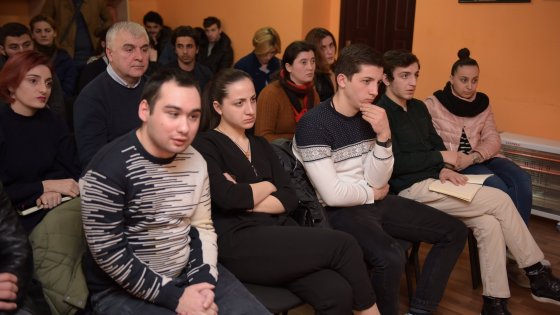 Mayors of Kutaisi and Telavi Municipalities met with citizens and presented One-year Reports at the Democracy Schools.