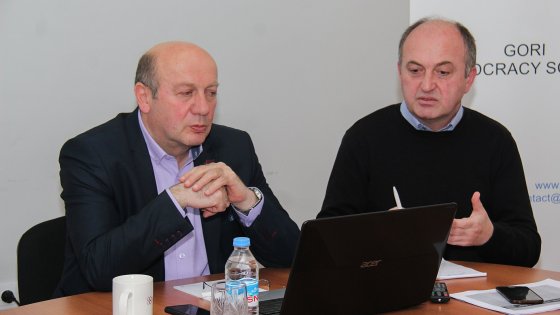 The presentation on the one-year reports from the Mayors of the Kutaisi and Telavi municipalities was followed by one at the Gori Democracy School. The Mayor of Gori, Mr. Konstantine Tavzarashvili, discussed the results of his work and implemented projects with civil society. According to the report, 54% of the 2018 municipal budget was spent on infrastructural development, such as reconstructing roads, street lights, kindergartens, and drinking water and irrigation systems. The funding for all these projects was more than 25 million GEL. These infrastructural developments were followed by social programs, composed of more than 3 000 beneficiaries from different social categories, which received 1 174 000 GEL in financial aid.

Mr. Tavzarashvili highlighted the importance of citizens’ engagement and noted that last year, 13 projects were funded by 274 000 GEL in the framework of the Citizens’ Budget Program. Thanks to the dedicated engagement of Gori’s citizens in the political and social spheres, they were awarded for “having best practices in terms of citizens’ engagement” among 24 municipalities by the EU.

As for the 2019 plans, issues such as reconstructing roads, improving the quality of emergency service, building & repairing ambulances, providing villages with drinkable water, and rebuilding schools and kindergartens are still among the most supported developments. The mayor also noted that Gori will have a general plan completed by the summer of this year.

Besides the aforementioned developments, Mr. Tavzarashvili discussed the educational, cultural and tourist programs. The Mayor of Gori is continuing his cooperation with local and international non-governmental organizations. Under the EU grant, infrastructural developments will be implemented close by to the “Lomchabuki” and ethnographic museums. The Memorial of Shota Rustaveli and its surrounding garden will be reconstructed. There are also plans to build traditional Georgian handicraft workshops, where tourists will be able to make themselves familiar with such traditions. These workshops will create new job opportunities for the local population and will serve educational purposes. Additionally, it is also planned to create walking trails around the Gori Fortress.

After the presentation, Mr. Tavzarashvili opened a question and discussion session, answering a number of the citizens’ questions. The attendees were interested in issues which are important for the development of their city, and even came up with new ideas and initiatives for how to tackle concrete problems. Discussed issues included, among others: turning the Mejuda River into the landfill for construction waste, restoring the old-fashioned attractions in the Gori Recreation Park, creating exchange opportunities for the sister cities’ youth, taking care of the recreational parks and squares, the restoration of windbreaks and improving green initiatives, the existence of non-regulated outdoor trading points, problems within the public transportation system, and problems concerning the city’s homeless animals.

One of the attendees of the meeting posed a question to the mayor regarding the misuse of administrative resources and hiring more employees than necessary. The Mayor responded that an examination of such policies has been planned, and noted that the heads of municipal departments will also present a report of their activities in the same format.

The Mayor of Gori’s presentation of his one-year report was organized by the Gori Democracy School of the Eastern European Centre for Multiparty Democracy (EECMD). EECMD constantly addresses its efforts to increase the accountability of elected officials and encourages the voicing of public opinion through organizing such meetings and discussions. The event was attended by the alumni of the Democracy School, as well as employees of local self-government and representatives of media and non-governmental organizations.

The presentation on the one-year reports from the Mayors of the Kutaisi and Telavi municipalities was followed by one at the Gori Democracy School. The Mayor of Gori, Mr. Konstantine Tavzarashvili, discussed the results of his work and implemented projects with civil society.