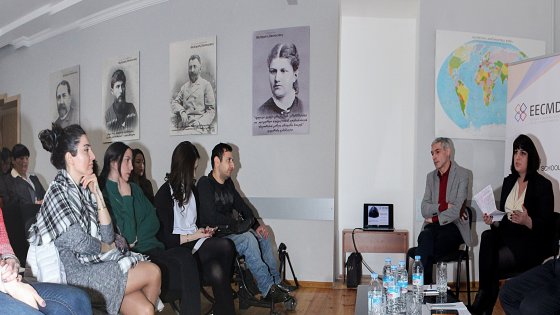 Ilia Chavchavadze is among the founders of the tradition of the Georgian democratic thinking. His views have been discussed at democracy schools, democracy camps or at other EECMD events over and over. This time, however, EECMD decided to alter the nature of the discussions by making them more regular and organized.

“Ilia in the XXI Century” was the title of the event which hosted the students of the democracy school, its graduates, school coordinators and invited guests. During the discussions the following issues have been explored: human rights, secularism, minorities and women’s political participation, local self-government, citizenship, education and critical thinking, media, national identity and history. Most importantly, the discussions were based on the publicistic legacy of Ilia Chavchavadze, while the participants attempted to understand and explore the possible positions Ilia Chavchavadze would have taken in relation to the processes unfolding in Georgia and elsewhere, as well as his likely stance on issues that are being debated within the current Georgian political and public life.

At Telavi Democracy School, Ilia Chavchavadze’s writings on the issues of self-governance and governance as well as his appeal to the Georgian society of his time have been discussed. Speakers of the discussions remarked regretfully that the problems and challenges of 19th century are still relevant today, and the society is again to discuss that “those elected shall serve the country and not the king or the vassal”.

The issues related to ethnicity and secularism have also been discussed in Telavi. Here too, it has been pointed out that these issues retain their popularity even today: the relationships between the state, church, citizen and the government have been the points of debate both now and before. Thinking and writings of Ilia Chavchavadze is centered on the citizen, irrespective of their status, sex, ethnic background or religion: “Equality before the law is the basis of the fabric of the society”. Ilia believed that the religious diversity did not stand in the way of the national unity: “Religious diversity is not something we are afraid of. Georgian, himself/herself crucified for his/her faith, knows how to respect other’s faith”. Ilia brought the examples of the followers of various confessions – Armenians, Jews and Muslims and remarked that, throughout the centuries, these people found “the freedom of the consciousness” here in Georgia.

The issues related to the ethnicity and secular state were also covered at Gori democracy school. According to one of the speakers of the discussions, Suzana Beridze, the head of the Knowledge Center in the name of the St. Ilia the Righteous, Ilia Chavchavadze would drastically disassociate himself from those neo-Nazi groups who today act against his ideas, and brought Ilia’s writings on tolerance to strengthen her argument: “toleration does not mean compliance per se, but rather it means the respect which shall become the foundation for treating someone’s views,  even if they are unpleasant to you or stand against your views… is not it possible that person or people,  who are neither Christians, nor Muslims or pagans, be a good person or people?!

The issues of women’s rights and emancipation have been further discussed in Gori. Journalist Gvantsa Doluashvili quoted Ilia Chavchavadze to demonstrate how even today, his phrase is relevant: “Time is not far off when women’s work will yield its results and this whole half of humanity will be invited at the world’s table in order to occupy their deserved place”

At the Democracy School in Kutaisi, while discussing the publicistic works of Ilia Chavchavadze, the issue of education especially stood out. According to one of the participants, without implementing meaningful reforms in the educational sector it is impossible to catch up with the developed countries. Participant of the discussion further reiterated that working in this direction must become the priority, so that we can avoid future disappointments on the matter, as Ilia Chavchavadze wrote in his writings century earlier.

In Batumi, the discussions focused on the issues of human rights and minorities. Lawyer Malkhaz Nakashidze, a lecturer of law at Batumi State University, remarked that “in the context of human rights, Ilia Chavchavadze is very topical and modern. His ideas on law, equality, secularism and minorities are so thorough and contemporary that we have to teach our students Ilia as a lawyer”.

Yet another issue discussed in Batumi was journalism. One of the speakers, Eka Lortkipanidze from Radio Liberty, pointed out that the idea of public journal during Ilia’s time corresponds with the idea of current public broadcaster, which implies that the role of the media, on the one hand, is to educate the public, while on the other hand media shall criticize and expose the reality: “walk into the bottom of the river of life, and find the given meaning for its live portrait. There, at the bottom of life, he or she will find many pearls and even more sediment and mud. Exposing them…shall not make the journal fearful”. Also very topical is Ilia’s idea that the public media shall be created by the public and not by one person or a group of people.

At the meetings held in democracy schools, many other issues have been debated, which, directly or indirectly, relate to the publications of Ilia Chavchavadze: discreditation of values and the issues related to their re-assessment, the limits of freedom of expression, self-governance and decentralization, the state of the Georgian language and the current linguistic norms. The following questions were also asked: What would Ilia say on the rights of sexual minorities? On erecting the statue of Stalin? On “the Georgian March”? Would he go against building the mosque in Batumi? Both speakers and the participants agreed that, considering his progressive views and liberal values, Ilia Chavchavadze would have opposed the idea of praising dictators and would go against the ideology of hate, and he indeed did so during his life through his writings and activities. Unfortunately, it was the proponents of the ideology of hate who took the life of Ilia Chavchavadze.