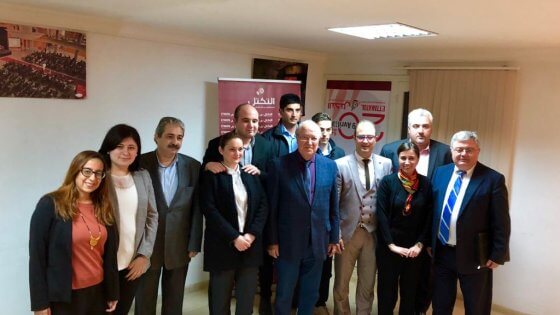 The Georgian politicians in Tunisia on experience sharing visit.

In the framework of the project – Regional Engagement to Advance the Creation of Hubs for Democracy (REACH for Democracy), Eastern European Centre for Multiparty Democracy (EECMD) in partnership with Centre des Etudes Méditerranéennes et Internationales (CEMI) organized the peer-exchange to Tunisia for Georgian political party and CSO representatives. The visit took place on December 3-7, 2018 in Tunis and provided an important opportunity to the political peers to share experiences on the challenges confronting them, track each other’s progress and connect with their sister parties.

On the first day, Georgian delegates met with the leaders of the parliamentary blocs of the Tunisian Parliament and discussed how the parliamentary parties manage to productively cooperate in the multiparty formats and reach a consensus on the issues of mutual interest. Georgian delegation was also introduced to Mr. Mustapha Ben Jaafar, a former President of National Constituent Assembly (NCA), who has himself participated in the process of drafting a new constitution and was actively involved in Tunisia’s democratic transition. Furthermore, during the visit, Georgian delegates attended the multiparty meetings and discussed Tunisian political and electoral systems, post-revolutionary reforms and multiparty dialogue platforms with Tunisian counterparts. Last but not least, the separate discussion panel was dedicated to the topic of involvement of women and youth in Georgian and Tunisian politics.