NewsUncategorizedForum of Young Politicians of the South Caucasus and Ukraine 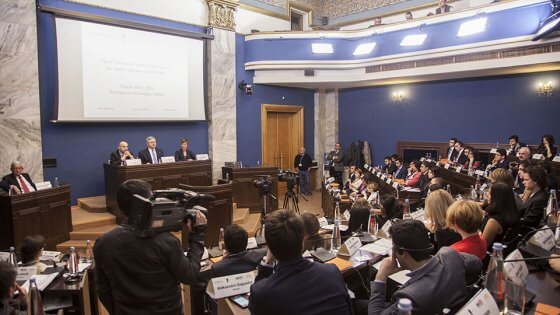 Forum of Young Politicians of the South Caucasus and Ukraine

Electoral systems and constitutional changes, election campaigning and the role of media in the democratic processes, women’s participation in decision-making and the strengthening of local self-governance were in the spotlight at The Fourth Forum of Young Politicians of the South Caucasus and Ukraine. During two-day event organized by NIMD (Netherlands Institute for Multiparty Democracy) young politicians from Georgia, Armenia, Azerbaijan, Ukraine and the Netherlands focused their attention on achievements recorded and challenges faced in the democratic processes underway in the region.

The Fourth Forum of Young Politicians of the South Caucasus hosted by the Parliament of Georgia was opened with the welcome speech from Davit Usupashvili. The Chair of the Parliament expressed gratitude to the Embassy of the Netherlands and NIMD for organizing the event and for motivating the youth. As he stated, he obtained a highly valuable experience from NIMD in the beginning of his political career.

“This institution has given me a very valuable experience of how should the multiparty system work and how should diverse social and political groups function when it is necessary for the best interests of the country; how they remain in constant debate and competition with each other, but not in a constant conflict. There are borders to competition and then to decision making”, – said Usupashvili and underlined that this problem is the most critical in South Caucasus and Ukraine. “Unfortunately, these are the most acute problems in our countries, South Caucasus and Ukraine, when old politicians, political groups and parties are over-convinced in own righteousness and it becomes hard to continue political dialogue and debate on political issues to find the right solutions to a situation.”

The Deputy-Ambassador of the Netherlands Floor Nuiten-Elzinga also addressed about sixty attendees.

Unique format of the Forum brings together young politicians with various political affiliations from all over the South Caucasus and Ukraine, the Forum remains a critical platform for political and policy debate by the region’s future decision-makers.

The Forum continued with consideration of achievements and future challenges for democratic processes in the region. The attendees discussed electoral systems and Constitutional changes, electoral campaign and role of media in democratic processes, women participation in decision-making and enhancement of municipalities. 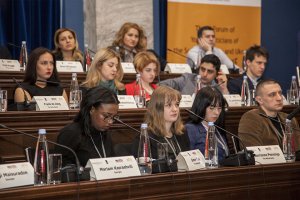 Principal Secretary of State for Foreign and Commonwealth Affairs of Great Britain and Northern Island attended The Fourth Forum of Young Politicians of the South Caucasus as an honourable Guest. In his speech Philip Hammond underlined the importance of regional integration and development.

“The opportunities for different people of this diverse region to mix and to understand one another should be growing not decreasing. There is an economic cost to unresolved conflicts, particularly when closed borders prevent the regional trade that is such an effective engine of economic growth. There is also real human cost to consider, too,” Mr Hammond said. “I know the cost of conflicts from my time as Secretary of Defense of the UK. Twenty-five years on from the collapse of the Soviet Union, thousands of refugees and internally displaced persons in this region remain unable to return to their homes, including many here in Georgia. Working together is the key to unlocking the true potential of this region- a region which is located on the crossroad of Europe and Asia, a traditional crossing place between East and West and North and South; a region that could become a significant link in a new Silk Road.”

The forum concluded its work on March 31 with a closing session. “But I would like to highlight my very own three observations. We have really made this Forum not the NIMD Project but your project. Second, we have learned how to work with each other and we have learned more. In the past year, we have learned better how to work with each other and also how to do democracy better. Trainings and exchanges that have taken place, I see it here, contributed to good quality of debate a lot. I think this Forum had grown a lot. Some who took part in the first and second Forums might agree that the quality and maturity of the debate had improved a lot. Today and yesterday I have been listening to young politicians who understand better what a serious political dialogue means”, – said Levan Tsutskiridze.

The Young Politicians Forum, which aims to develop the ability of youth and to build a bridge of trust among them, was held this year for the fourth time, with the support of Georgia, The Netherlands and Great Britain.