NewsUncategorizedEECMD has celebrated International Day of Democracy at Democracy Schools 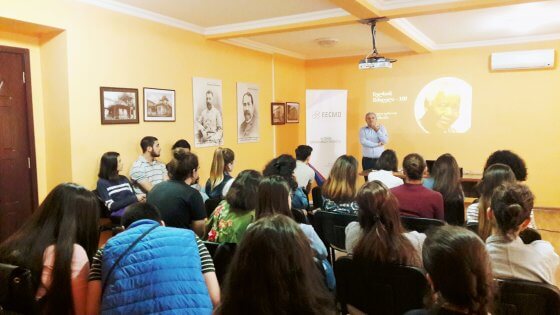 EECMD has celebrated International Day of Democracy at Democracy Schools

EECMD Democracy Schools have celebrated International Day of Democracy by recalling the deeds of democratic leaders, the history of Georgian democracy and highlighting the importance of democratic governance, in general. Besides, the existing challenges on the way of democratization on a national, as well as on a global level, the influence of wide-spread propaganda and the roles of the states in this complex process was also addressed during the meeting.

International Day of Democracy is being celebrated on 15 September by the UN since 2008, giving possibility to enhance democratic values, talk openly about the challenges of democratization and find the solutions to those problems, respectively. Coordinators of Democracy Schools, guest-speakers and other attendees of the event overviewed the history and transformation of democratic form of governance from the Antic period till nowadays. They also identified the characteristics and major challenges for the modern day democracy. During their speeches, the attendees of the meeting mentioned important articles by famous authors, such as Fareed Zakaria for example. In his article ‘The Rise of Illiberal Democracy’, Zakaria notes, that ‘”Western model” is best symbolized not by the mass plebiscite but the impartial judge’. Kim Dae Jung and his article “Is Culture Destiny? The Myth of Asia’s Anti-Democratic Values” was also mentioned, wherein the South Korean leader states, that democracy is not only a European phenomenon, that the quest for freedom is familiar for the residents of other continents as well, thus democracy is the destiny, not the culture.

As the meeting continued, the attendees also discussed Democracy Index, an international research which measures and identifies the level of democratization within the country and Georgia’s ranking on a global scale. According to the statistics of 2017, Georgia occupies 79th position out of 167 countries and is labeled as a hybrid democracy. It is important to highlight the fact that the lowest evaluation was received in the section of government functioning (4.29) and political culture (5.00). Relatively better scores were received in the sections of Electoral System and Political Pluralism (8.67), political engagement (6.11) and civil freedom (5.59).

During the meeting at Telavi Democracy School the first Georgian Republic was recalled. Mr. Tengiz Simashvili, a guest speaker and professor of Telavi University stated, that Georgia had developed one of the best regimes of democratic governance over a hundred years ago and first and foremost, that system was created by the citizens’ engagement. The speaker also talked about the existing forms of governance, the diversity of political parties within the governing institutions and the level of political participation of ethnic minorities. According to his opinion, statement, that Georgia has never had a democratic experience is the part of Soviet and Russian propaganda.

Russian propaganda was also a hot topic for discussion at Kutaisi Democracy School. The attendees of the meeting, together with the guest-speaker, lawyer and trainer Khatia Ckhetiani discussed the possible threats arising from the involvement of powerful states in the domestic policies of young democracies. It was mentioned, that this type of involvement has an increasing character and it is important to be opposed by enhancing democratic values.

As for Gori and Batumi Democracy Schools, International Day of Democracy was dedicated to an outstanding democratic leader, Nelson Mandela. The attendees mentioned South African leader’s great commitment in building a democratic world, fighting against the apartheid, protecting human rights, promoting and establishing democratic values and producing a peace-keeping reconciling politics. Besides the exciting discussions, a documentary about Nelson Mandela was also shown at both schools.

The meeting was also attended by “Democratic Leaders”, who were selected by the Eastern European Centre for Multiparty Democracy (EECMD) among the alumni of Democracy Schools due to their deeds and commitments to their communities. Democratic Leader 2015, Gvantsa Doluashvili addressed the participants of Gori Democracy School and, according to the example of Nelson Mandela, stressed on the importance of so-called “social glue”, meaning that reconciliation between opposing parties instead of political revenge is crucial and, unfortunately, Georgia lacks such kind of reconciliation attempts.

As for Democratic Leader 2018, Mr. Archil Mchedlishvili, he prepared a speech at Telavi Democracy School on the significance of citizens’ involvement and active participation in democratic processes. He noted, that without citizens’ demand to held government representatives accountable for their actions, democratic system simply will not work.

The UN itself, which started to celebrate International Day of Democracy 11 years ago, stated, that democracies nowadays should become more inclusive and promote political engagement of marginalized groups and youths. On the other hand, they also highlighted, that democracies should become more responsive to innovations, climate change problems and migration related issues.