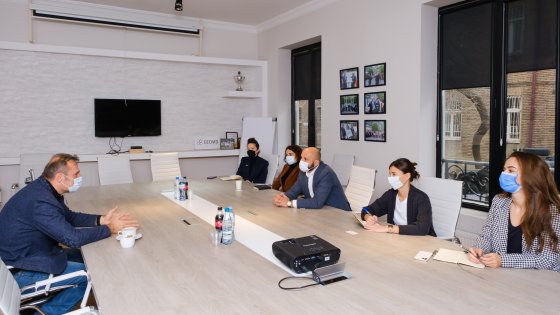 Mayor of Tsalenjikha , Gia Kharchilava, met with the executive director and project managers of the Eastern European Centre for Multiparty Democracy (EECMD).

At the meeting, we discussed a wide range of bilateral relations and prospects for future cooperation.

EECMD will open a new office in Tsalenjikha – “Democracy Hub” in the near future. During the first stage we will concentrate on the following main areas:

“My goal is to make the local self-government independent and strong. People have given me the power, and I want to give it back to them. I will do my best to make Tsalenjikha an example of change, progress and democracy,” said Gia Kharchilava.

EECMD has vast experience in political education, political dialogue, fighting anti-democratic propaganda and combating its tendencies. We hope that our experience and activities in this direction will be fruitful and valuable.

“The “Democracy Hub” will be a space for meetings with experts on democratic governance, democratic politics and political activity issues.” – said the Executive Director of EECMD, Levan Tsutskiridze.

Mayor of Tsalenjikha, Gia Kharchilava, met with the executive director and project managers of the Eastern European Centre of Multiparty Democracy (EECMD).