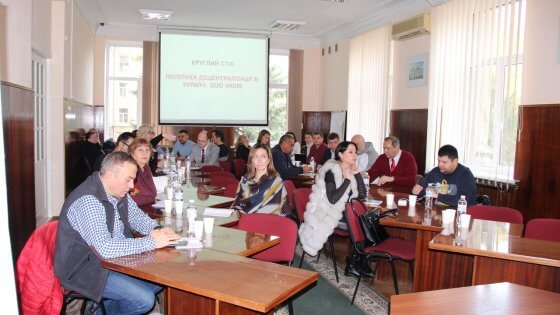 EECMD continues its work in the field of democracy support in Ukraine. Reform of the national system of local self-governance is part of the ongoing process of democratization of Ukraine.  On November 16 and November 24, 2017 respectively EECMD Odessa and EECMD Lviv conducted round-tables on decentralization in Ukraine. The EECMD round-table in Odessa was organized in cooperation with Odessa Regional Institute for Public Administration of the National Academy for Public Administration which welcomed productive round-table with a special focus on Odessa region at its premises. EECMD premises in Lviv became a site of a lively and fruitful discussion of the problems of decentralization in Ukraine and the Lviv region. Both round-tables, organized by EECMD, brought together local experts in decentralization as well as representatives of civil society, political parties, think tanks and local administrations specializing in this area. The roundtable in Odessa in Lviv were moderated by Sergii Glebov and Petro Kuzyk, the Democracy School coordinators in Odessa and Lviv respectively.

Both round-tables did not only outline the existing challenges and problems of the process of decentralization in Ukraine and its regions, but also attempted to delineate the potential political and administrative responses and approaches to solving them in the process of realization of the reform. In general, participants did see the direct interconnection between process of decentralization in connection with the rest of the democratic reforms Ukrainian society struggling to implement nowadays, sometimes even opposite to the hidden intentions of some local political and economic elites.

One such approach discussed during the roundtable is an encouragement of active participation of citizens in this process. As one of the experts summarized this idea during the roundtable, “the engagement in the political and reformist processes of a larger number of Ukrainian citizens potentially is a very important asset… We need to develop both in the sense of the civic engagement as well as improvement of our own capabilities.” It is clear now, that EECMD will continue its work in Odessa and Lviv in the field of decentralization by monitoring its successes and shortcomings in the future events which follow after these first initial November 2017 round-tables.