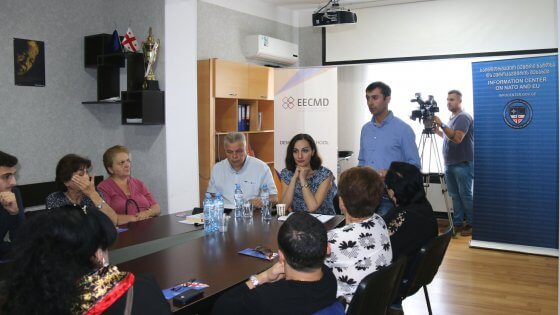 As Georgia has counted 10 years since the Russian-Georgian August War, the discussions regarding the issue of who had really started the war, became quite popular again. Even the presidential candidates addressed this issue during their electoral campaigns. Thus, Democracy Schools decided to organize discussions regarding the August War and the Russian influence over Georgia, in general.

In the framework of this discussions, the head of the Information Center on NATO and EU, Nino Bolkvadze visited Telavi Democracy School. During her speech, she highlighted, that “the war hasn’t started on August 8, but Russia has been preparing for the aggression during the whole year instead.  Russia will never let Georgia and Ukraine become members of the NATO and will do its best to hinder those processes, and the announcement of Mr. Lavrov is the illustration of this fact…Russia has been engaged in a hybrid war, which has turned into a direct aggression in August 2008 and this is a continuous process.” – Ms. Bolkvadze noted.

The Head of Information Center overviewed the international formats Georgia is engaged in and the importance of using those resources, as well as concentrating the attention of International Community against the Russian occupation. At the end of her speech, Ms. Bolkvadze noted, that “after 10 years it is already time to clarify things and stop speculations regarding the issue of who had started the war. It is obvious, that war was started by Russia”.

The guest speakers, historian Sulkhan Kuprashvili (Ak, Tsereteli State University) and Rezo Okujava (Batumi State University) briefly overviewed the history of First Georgian Republic. They discussed the historical context in the country and in the region 100 years ago. Historians evaluated the readiness of Georgian population for declaring independence, as well as the institutional arrangement of the country and the challenges and barriers those statesmen had to overcome.

The invited speakers also talked about the annexation of sovereign Georgian state by Russia, just three years after declaring independence and they analyzed Russian policy towards Georgia till the modern period. According to the historians, as the historical examples illustrate, we, as a nation are constantly making one and the same mistakes and are influenced by Russian propaganda. Discussion regarding the August War can be considered as a part of this propaganda; blaming Georgia in outbraking the war can only serve the Russian interests and damage the image of Georgia on an international level.

Besides mentioned above, the documents analyzing the Russian-Georgian conflict, were also discussed during the meeting.  Giorgi Gotsiridze, Specialist of International Relations talked about the so-called, “Tagliavini Report” at Telavi Democracy School meeting. According to him, none of the reports which are based on neutral and realistic judgment include the incidents when Georgians were trying to make a genocide of their own people within their own borders and it is totally the influence of Russian propaganda.

The attendee of Batumi Democracy School meeting, lawyer Giorgi Kimshiahsvili also talked about the “Tagliavini Report” and also mentioned a book by Ronald Asmus, “A Little War that Shook the World” in which the author explains the Kremlin aggression in an argumentative manner, that Russian leadership was ready to undertake any decision to hinder Georgia’s European and Euro-Atlantic integration, that Putin was only looking for an opportunity to pay his debts for the West. Taking into consideration those facts, the guest speaker clarified, that the question “Who had started the War” is not relevant at all and answer is as plain as a day – of course, the war was started by Russia. All other responses to this question can be considered as part of Russian propaganda.

The discussion regarding the outbreak of the war continued between the representatives of governing and opposition political parties as well. They overviewed Georgian Policy towards the occupied territories, also talked about Georgia’s integration in European and Euro-Atlantic organizations, Eurosceptisicm, the ways to combat Russian propaganda etc.

The meetings were attended by Democracy School Alumnis, representatives of local self-government and media, as well as political parties, active citizens and other stakeholders.

As Georgia has counted 10 years since the Russian-Georgian August War Democracy Schools organized discussions regarding the War and the Russian influence over Georgia.