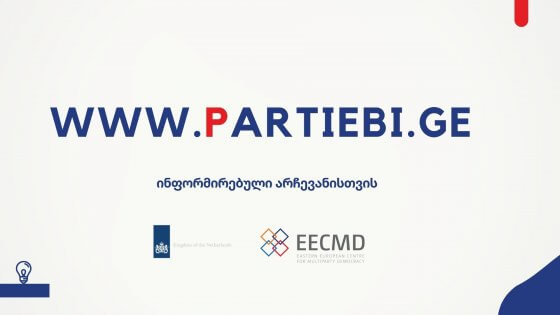 From 2012 onwards, www.partiebi.ge regularly publishes the political parties’ pre-electoral views regarding the country’s most important political, economic, and social issues. The project is implemented with the financial support of the Dutch Embassy in Georgia. For the Parliamentary Elections of 2020, it aims to support the formation of the political parties’ proposals and inform the public about them. The updated website provides and unites the pre-electoral programs of all the key electoral subjects of the Parliamentary Elections of 2020. On www.partiebi.ge political party visions on coping with the COVID-19 crisis, economic, social, international relations, and national security issues are available. In addition, via www.partiebi.ge visitors have the opportunity to compare the political parties’ views on particular issues of their interest or/and download the entire electoral programs.

For the upcoming elections, a new online project, “Election Compass Georgia,” has been introduced to www.partiebi.ge. Election Compass Georgia is a non-partisan tool that provides users with information on political parties’ positions and helps them figure out which party’s visions and priorities are the closest to them. The Compass was put into practice by a team of Georgian researchers from the Caucasus Research Resource Centers (CRRC) Georgia, the Georgian Institute of Politics (GIP), and the Policy Institute of the International School of Economics at Tbilisi State University (ISET-Policy Institute). The project is supported by the United States Agency for International Development, the German political foundations, and the Kingdom of the Netherlands, and implemented by the Eastern European Center for Multiparty Democracy (EECMD), Friedrich-Ebert-Stiftung, Friedrich Naumann Foundation for Freedom, Heinrich-Böll-Stiftung, Konrad-Adenauer-Stiftung, and International Republican Institute (IRI). Methodological expertise and IT security were provided by Kieskompas, a company specialized in Voting Advice Applications based at the Vrije Universiteit Amsterdam.