NewsGeorgiaTraining for the Heads of Local Self-government Bodies in Kakheti 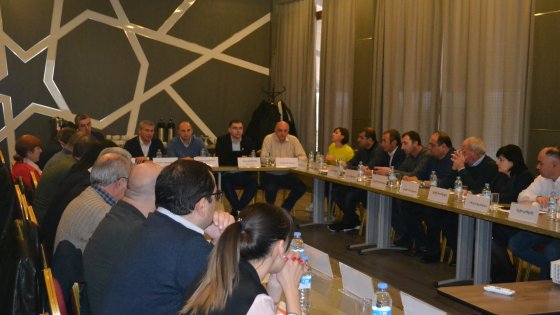 Training for the Heads of Local Self-government Bodies in Kakheti

On 9-10 November, 2017, the Eastern European Centre for Multiparty Democracy (EECMD) organized the training for the newly elected mayors, the heads of City Assembly (Sakrebulo) and relevant financial departments on the issues of budgeting process within the local self-government bodies and the major parameters of the budget. Koka Kiguradze, head of the “Centre for the Development of Management Systems”, led the training.

The meeting was attended by the newly elected heads of the local self-government bodies- City Assembly (Sakrebulo) and the City Hall- and their financial departments, as well as by the State Attorney-Governor in the Kakheti region, Irakli Kadagishvili, and other representatives of the Administration of the State Attorney-Governor in Kakheti. The newly elected mayors, heads of City Assembly and relevant financial departments from the municipalities of Akhmeta, Gurjaani, Dedoplistskaro, Telavi, Lagodekhi, Signagi and Kvareli took part in the meeting.

At the initial phase of the training, the major legislative changes related to the functioning of the local self-government bodies have been discussed. The first day of the training was mostly devoted to the overview of the international and local legislative practice regarding the financial guarantees for the local self-government and its organizational and legal form. Moreover, the following issues have been further discussed: budgetary system of Georgia, budgetary calendar of the municipality, the priority document of the municipality and the programmatic aspect of the municipal budget.

The second day of the training focused on the budget planning and adoption, as well as the budget fulfillment and the procedures of accounting. During the meeting, the issues of delimiting the powers between the legislative and executive bodies and engaging citizens in the budget elaboration process have been further explored. Additionally, the systems of local taxes and duty as well as the issues of state transfers, loans and grants were examined.

Participants have been actively engaged in the training through, including, contributing to the discussions. Apart from the topics given on the agenda, participants demonstrated interest in the prospects of increasing the sources of income for the municipality as well as in enhancing the cooperation with various municipalities of the region and the central government.