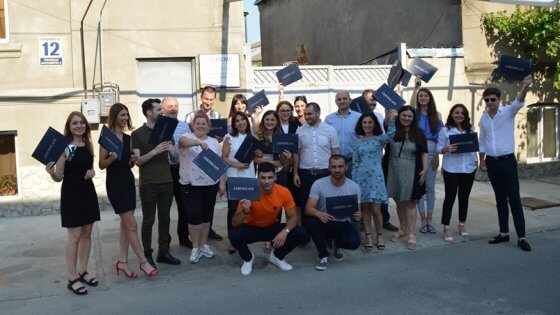 Study program at Gori and Batumi Democracy Schools started in February, 2019. The topics covered included: democratic society and governance, types of democratic representation and mechanisms of influence, master classes on negotiation and conflict resolution, corruption and anti-corruption policy measures, local self-governance and the importance of policymaking.

This year, a new component about the development of cities and urban problems, was added to the study module, designed in response to the current challenges of modern cities. Guest speakers, together with the attendees of both schools discussed the issues such as economic development of the cities, cultural heritage, urbanization, migration, city concept adjusted to the needs of citizens, increasing prosperity of cities and the current state of affairs in Georgian cities.

Democracy School attendees were actively involved in extracurricular activities, such as participation in different meetings and public discussions related to the issues of local, regional and national importance, charity and environment cleaning activities.

‘Since 2012, annually, new wave of graduates are becoming members of our alumni network.  The group consisted of public servants, representatives of civic sector and media. I am sure, these people will be real change-makers in our society and they will use acquired knowledge in positive ways’– Democracy Education Program Officer, Ms. Nino Khitarishvili, addressed to the public.

The attendees of Democracy School also shared their impression and feedback.  Human rights defender, Mr. Lekso Merebashvili believes, that Democracy School had made him more active in terms of civic participation. According to a public servant, Mr. Beka Asanidze, Democracy School grants people with different educational and professional knowledge with a unique opportunity to gain high-quality informal education.

After graduating Democracy Schools, the alumni are becoming members of alumni network, which implies interesting networking, joint professional meetings, exchange programs, boot camps and small grants. The hub of Democracy Schools is always open to the ideas of its alumni, while the organization stays their supporter and reliable partner.

Recruitment for the upcoming program for Gori and Batumi Democracy Schools will start at the end of this year. Information will be published on the official website and social media channels of the organization. Besides, informational meetings will also be arranged.

Five month intensive democracy education program is being implemented in five Georgian cities since 2012. Program is designed for the representatives of political, public, civil society and media sectors, as well as for students and active citizens interested in democratic issues.

On June 25-28, 2019, Eastern European Centre for Multiparty Democracy (EECMD) hosted the graduation event of the seventh group of graduates of Batumi and Gori Democracy Schools.