NewsUncategorizedRegional Conference on „Money in Politics“ 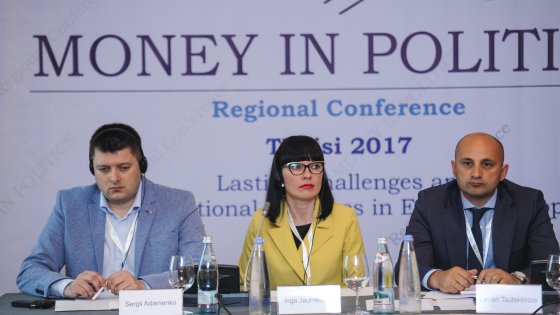 Regional Conference on „Money in Politics“

The conference aimed to discuss the impact of money on politics, especially in the context of the Eastern European countries. Moreover, the conference looked at the topic of money in politics from the diverse angles, inter alia, the issue of trust in politics, new technologies and the disclosure of political finance information, sources of funding for political parties, financial incentives to increase women’s political representation, and the overview of the international best practices to fight corruption and the misuse of administrative resources during the election periods.

Mr. Levan Tsutskiridze, Executive Director of NIMD EEN chaired the panel session on the sources of funding for political parties. The panelists discussed and identified the challenges faced by political parties in terms of reform and fundraising, and also overviewed the existing mechanisms and regulations to minimize the negative impact of money on politics. The participants from Ukraine further stressed the negative role played by the oligarchs during the elections, as well as the need to embark on an actual implementation of the laws which have been already adopted. Panelists agreed on the necessity of changing the status quo vis-à-vis the political party funding and emphasized on the increased role of the societal engagement.

The conference was attended by more than 100 participants from the Eastern and Central European countries. The regional conference “Money in Politics” is held already for the second time in Georgia. For more details about the conference, visit the specially created website: www.moneyinpolitics2017.sao.ge