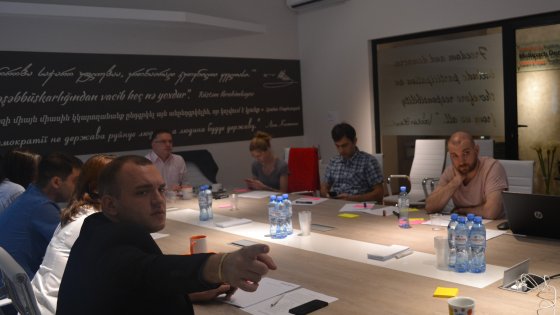 The meeting was led by Raoul Kramer, the founder and managing director of Socioneers. During the meeting, the party representatives have been introduced to the new technologies and digital tools, vital for the political parties to ensure an equal participation, as well as more open and transparent decision-making. Moreover, the examples of various European parties, such as Pirate Party, Podemos, Five Star Movement and En Marche, have been shared with the participants to depict the impact of the use of new technologies on the work of the political parties.

By engaging in various activities throughout the duration of the meeting, the representatives of the political parties shared their experiences of utilizing new technologies in their respective organizations, and identified their needs and priorities to embark on incorporating digital tools within their party structures.

Although the political parties acknowledged the lack of resources to fully commit to the introduction of new technologies, they have expressed their willingness to further enrich their knowledge on the issue in order to gradually incorporate the digital tools in their party work.