NewsAzerbaijanIn support of Emin Aslan/What wrong did he do, anyway? 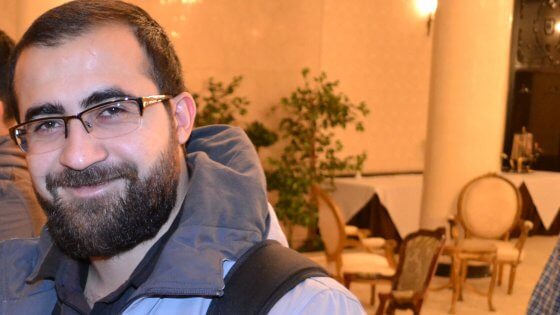 In support of Emin Aslan/What wrong did he do, anyway?

I met Emin in 2014 when we, as part of then the regional office of the Netherlands Institute for Multiparty Democracy (NIMD) arrived in Baku, Azerbaijan with a mission to work with the young people of this country and support it by education and international experience sharing about democracy. Our mission was straight forward and transparent: to educate young people about democratic values.

We met Emin in Baku during the job interview where he immediately struck a chord with us by his open nature and his desire to do something good, something meaningful for his country. We signed a contract soon and Emin took charge of organizing educational programs for young people from Azerbaijan. With financial support from the Dutch and the British Governments, we worked on training programs on the issues of democracy, rule of law and human rights.

These were the exciting times as we worked with a large group of young, motivated, dedicated people in Baku, Kutaisi, Tbilisi and Brussels. We were there to help them speak to each other, to better understand each other, and ultimately share their concerns and dreams. We organized meetings in the Georgian and European Parliaments to make them aware of what are the issues of concern in the different countries of the region, how democracies are evolving, how can disputes be peacefully resolved and what the youth can best do for the better future of their countries.

This was our, Emin’s work. He was doing his job with dedication and love of his country, with a belief that little by little good things add up to something bigger and better; that education and knowledge form a pathway to freedom, development and peace in his country and in this region. I hope he still believes in this, even in the face of the adversity he now faces.

Sitting in the office these days, I cannot stop thinking about his personal wellbeing but also of the future of the country that chooses to intimidate and silence its best and the brightest people. What harm was Emin doing to Azerbaijan? What did he do wrong? It now seems that the only wrong he committed was to return to his home in Baku to celebrate his achievement of graduating with the law degree from Cyracuse and to create a family with the women he loves – something he wanted to happen in his own country, not elsewhere, despite the risks he knew were there. This is horrible. What future is there if we, instead of encouraging and protecting the best educated and most motivated people of our nations, silence them and throw them in prison cells hoping that they never ever speak again, that they never ever dream again of a better future? What good can possibly come out of it?

This year Azerbaijan celebrates the centennial of its independence, which was established in 1918 only to be brutally interrupted by the Bolsheviks in 1920. But these short two years were wonderful and very promising. Azerbaijan became one of the most progressive Muslim majority nations of the time, it established equal political rights of women and men and had a vibrant multiparty and multi-ethnic parliament. It was looking to the future, not the past. It was not fearing diversity, it was embracing it; it saw strength in pluralism, not weakness. I hope it will return to this path again, but it can only do so with people like Emin Aslan, not without them.