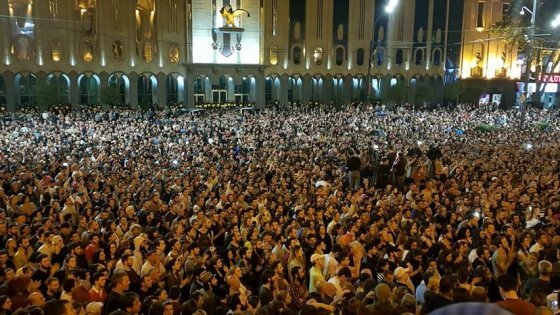 What is the impact of recent street demonstrations, which factors are causing civil protests, how is the process developing itself and what are the results they produce; also, in which terms are the major civil actors (including media, opposition parties, civil society organizations and government members) involved in these processes – those important topics were stressed during the round table discussions at EECMD Democracy Schools in Batumi, Telavi, Kutaisi and Gori by the Democracy School graduates, as well as politicians, civil society and media representatives.
Attendees of the discussions tried to analyze the ongoing process and share their personal attitudes and opinions with their counterparts.

Gvantsa Doluashvili, Director of Gori Community Radio “Mosaic” and civil activist believes, that “people wanted their humanity and right to pursuit happiness to be recognized and accepted. That is why they gathered in the streets. Their protest was followed by the demand to destruct the whole system, in general, which sounds quite logical. But, while talking about the disintegration of the system, it is important to understand that system is not only government or cabinet of ministers, but the unity of cultural and social environment and values that ultimately determine the quality of our life”.

Jaba Ananidze, Journalist of the newspaper “Batumelebi”, declared, that although the protests nowadays are more organised, they are always followed by the demand of resigning the entire government, instead of focusing on one, concrete problem. Mr. Ananidze added, that despite the severe social and economic problems, people still have quest for justice. People also tend to pay more attention to the issues concerning their everyday lives, rather than caring about the problems of workers, miners and other marginalized social groups.

Protector of human rights from Pankisi, Shengeli Tokhosashvili, addressed the importance of justice and the involvement of law-enforcing agencies, as well. Tokhosashvili believes, that the wave of protests can be considered as “awakening of the population”, that people experience severe sense of injustice and the case of Machalikashvili is making things even worse. It is considered as an attempt to cover-up the crime, while the prosecutor’s office is spreading biased information.
Another topic under consideration was the process of organizing the street demonstrations themselves. Attendees of the discussions declared, that the organizers failed to formulate their demands in an acceptable manner and deliver those demands to the people and government in a coherent, cooperative and argumentative ways. The lack of solidarity and coherence among the organizers of the demonstrations caused people to lose faith in them. On the other hand, this might also be caused by the weakness of more experienced civil actors, including NGOs and opposition parties.
Malkhaz Chkadua, Regional Office Manager of Transparency International Georgia in Batumi, declared, that NGOs need to review their policies, in order to become more responsive to the demands of the society and have more concrete positions towards government.

Political parties were also criticized in a similar manner. Attendees of the meeting agreed, that demonstrations demanding political changes are the part of political processes, thus, political parties should be fully involved in those processes. However, nowadays, Georgian political party system is in crisis, including both – governmental and oppositional political parties. It was mentioned, that parties focus more on solving their inner problems and receiving more benefits, rather than being responsive to public demand and meeting their voters’ expectations. As a result of this mismanagement, people are gradually losing faith in political parties and they are trying to ‘solve’ their problems independently, via massive public demonstrations.

Another important issue addressed in the framework of the discussions was the media coverage of the street protests and the role of media during the demonstrations, in general. Sopho Zhgenti, journalist at Adjara TV, declared, that media was not able to function independently and they had to follow the government instructions and response to political party demands while covering the demonstrations. On the other hand, social media operated in a different manner and turned to be more responsive to the demands of the society. However, despite the traditional media, social media was also used to spread propaganda and marginalize several actors of the protests. Unfortunately, civil servants and teachers were also trying to shift the center of attention to the less important issues and spread the disinformation.

Despite the massive public demonstrations local problems were also addressed during the discussions, including the protests against the initiative to build a hydroelectric power station in Pankisi or to launch a campaign in Gori and rename the Stalini street. Both cases are characterized by the ignorant attitude from local and central government representatives, strong influence of state security services and disability to prepare a legal framework for solving the problem.

Round table discussions at EECMD Democracy Schools were attended not only by civil society actors, but government representatives as well. They stated, that government’s responsiveness to public opinion has increased and recalled the example of recent constitutional changes. Other participants of the discussions criticized government representatives and responded, that Georgian government does not have a long-term strategic plan, and their actions and policies have short-term character and are oriented to “day-to-day existence”.

Another focal point to which government should pay attention to is their complex, coherent and long-term strategy for decision-making. People do not directly gather in the streets to demand justice, but their actions are caused by the inability of governmental structure and institutions to solve the severe problems of their citizens, to analyze the currents state of affairs and implement preventive action plans, also, to consult different groups of people or civil actors, instead of making unilateral decisions.

Participants of the meeting evaluated recent street protests in the capital and the regions as a kind of “act of awakening”, which is a step forward in the process of increasing the control over and accountability of the government by the society.