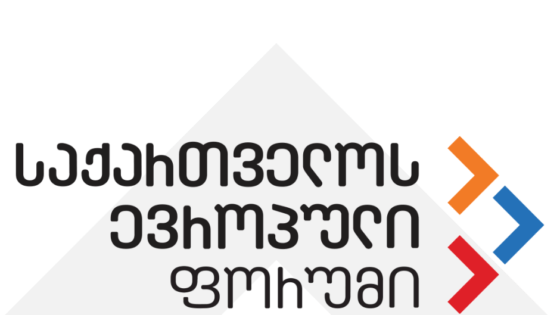 Soon after the Russian invasion of Ukraine invasion started, the anti-democratic political, social, and media groups doubled down with their pro-Kremlin propaganda and political efforts to spread discord and disorganization within Georgia. These domestic forces (sympathizing with and connected to Kremlin) attempt to undermine Georgia’s increasingly fragile democratic consensus. In this light, it is of utmost importance to support an inclusive and representative dialogue among pro-democratic political, civil, business, and other groups in the country and amplify their voices through large-scale citizen outreach and engagement.

Easter European Center for Multiparty Democracy (EECMD) began working on establishing a dialogue platform for democratic groups earlier, in 2021, but the Russian invasion of Ukraine increased the urgency of the issue and prompted EECMD to speed up the process of launching the European Forum of Georgia i.e., the EECMD-led and supported non-partisan, multisectoral, and informal dialogue framework.

On March 4, 2022, EECMD issued an open statement calling for broad civic and political coordination and inviting all interested parties to join the Forum. Over three hundred civic groups, activists, politicians, journalists, and academia representatives have expressed their support for the initiative and willingness to take part in an informal dialogue to develop a broadly accepted national action plan for democracy – an overarching civic framework outlining major steps and actions for countering anti-democratic forces and propaganda, analyzing and preventing the possible adverse scenarios that might unfold in the country, and outlining key steps to strengthen the Georgian democracy and resilience.

Over the last few months, the Eastern European Center for Multiparty Democracy (EECMD) organized 32 meetings in Tbilisi and 20 other cities of Georgia, to study the interests and concerns of citizens and reflect them in a ‘scenario planning’ paper – journalists, private sector, political parties, academia, creative groups, and civil society leaders that come from formally organized structures (e.g., EECMD’s Democracy Schools, Centers for Civic Engagement, regional CSOs) and individual civic activists and democracy leaders participated in dialogue sessions. These meetings aimed to consolidate democratic groups to highlight multifaceted support for Georgia’s democratic transformation within the country and lay a solid ground for mutual assistance and coordination at the moments of potential critical social and political junctures in near future, including mutual assistance in case of physical or other targeted specific threats from, state, non-state or foreign actors.

EECMD facilitated a formal process to develop a shared analysis and scenarios for Georgia in the shadow of the current crisis encompassing scenario thinking and planning to inform and guide the coordinated actions of the EFG members to assist them to carry out more targeted and meaningful policy advocacy independently or in the framework of the Forum. The scenario paper was developed by a group of experts from the fields of media, politics, diplomacy and economics. This, comprehensive assessment of politicoeconomic scenarios, covers the two – the most “optimistic” and the most “pessimistic” trajectories for the future potential development of the country and offers a set of recommendations for the way forward.

The implementation of the recommendations which are provided to the Government of Georgia and generally, civic and political forces in the country, would steer Georgia away from the significant risks and help it better use the politico-economic opportunities that are present. Scenarios could range from the outright collapse of the Georgian democracy to the more positive potential developments. At the early stage of the project, the team of experts developed a set of variables upon which the four directions of the scenario were built: (1) Government and Institutions; (2) Foreign Policy; (3) The Economy of Georgia and (4) Media and Civil Society.

The optimistic scenario, considers a situation when the political forces of the country are able to agree on a joint reform agenda to strengthen democracy and advance Georgia’s EU relations. Anti-democratic forcesare more effectively checked, the economy gains resilience and the government, supported by international partners successfully achieves better economic stability, accelerates growth and advanced European integration agenda. These steps are also shaped by resilient civil society and better organized political opposition which relies on a better, more forward-looking strategy, sets positive agenda and wins back trust of voters. Externally, Georgia stopping its democratic backsliding is also helped by the Ukrainian battlefield success as it diminishes the confidence and resources of the Kremlin focused political actors in
the Georgian society.

The worst-case scenario relies primarily on the assumption that Russian Federation succeeds in achieving its goals in Ukraine thus energizing its satellites elsewhere and Georgian political class is unable to resolve its internal discord peacefully, with an aim on national, rather than partisan interests. Georgia’s continuous weakening of its democratic culture and institutions will lead the country to the bring of the civil unrest and may, under some scenarios, lead to the country taking a more authoritarian leap, into some sort of more rigid authoritarianism: severely limiting the work of NGOs and media, restricting political competition and limiting international democracy assistance as per the Russian or Belorussian playbook. On the foreign policy agenda this may lead to Geogia officially distancing from its EU/NATO path and declaring a form of non-alignment and eventually, shall events unfold further towards this direction, come under the economic sanctions of the West which may ultimately lead the country to ‘Belarusization’.

The scenarios discussed in the paper show us the ways through which Georgia could reduce the damage to the country that may occur if the events develop in a pessimistic direction. In addition, the implementation of the recommendations offered to the Government of Georgia and its public-political forces will allow the country to use the existing opportunities faster and efficiently, change the lives of citizens for the better and help them realize their common interests. These reforms or changes in governance and politics mainly require the efforts of the Parliament and the Government of Georgia.

The responsibility and effective participation of the political opposition in thinking, discussion and dialogue on policy issues at all levels is respectively important. The forum is an opportunity for this kind of dialogues to take place, although there are other parliamentary and non-parliamentary opportunities that could be utilized.

Below is a short-summary of the recommendations which were developed by the expert team of
EFG/EECMD and based on a broader feedback from its public meetings across Georgia:
a) Domestic Politics and National Consensus
1. Reducing polarization and political fragmentation;
2. Renewal of political dialogue to agree on key issues;
3. Better dialogue between civil society and government;
4. Effective measures against anti-democratic and radical-nationalist groups;
5. Addressing issues related to illegal surveillance;
6. Elaborating a reasonable policy regarding migration from Russia;
7. Good conduct of 2024 parliamentary elections;
8. Reconciliation and civil equality policy reform with regards to Abkhaazia and South Ossetia,
currently occupied by Russia.

On March 4, 2022, EECMD issued an open statement calling for broad civic and political coordination and inviting all interested parties to join the Forum.