NewsGeorgia10th anniversary of Democracy Schools and founding of the alumni association 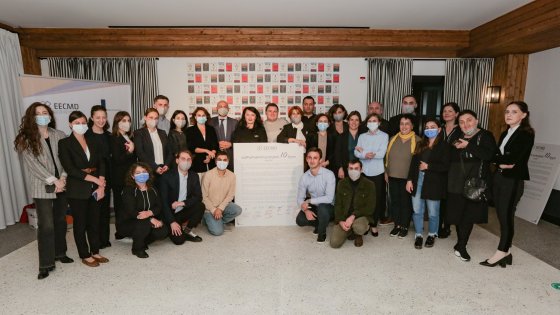 10th anniversary of Democracy Schools and founding of the alumni association

At the initiative of the Eastern European Centre for Multiparty Democracy (EECMD), we celebrated the tenth anniversary of the Democracy Schools with the founding of the Alumni Association. The main goal of the association will be to strengthen the alumni network of democracy schools, to proactively defend common democratic values, to mobilize alumni, to increase their role in civic life and to deal with anti-democratic tendencies.

Along with the establishment of the Alumni Association, the executive board was elected. The board members discussed the future activities of the association, the formation of the charter, the organizational part and the implementation of independent actions based on the needs of each region.

“The main task of the schools of democracy was and remained to promote the strengthening of democratic capacities in the country. For ten years, in Georgia and several Eastern European countries, Democracy School graduates have been talking about equality, media freedom, fundamental human rights, government accountability, and essential issues to building a viable democracy. Without these people, this voice would be less and much weaker. We believe that the existence of local democracy leaders is crucial for the democratic development of the country. “- Levan Tsutskiridze, Executive Director of EECMD

“As the ambassador of the Netherlands in Georgia, I am very happy to be here today, at the conference organised by EECMD  to celebrate the 10th anniversary of Democracy Schools. It is a very good occasion to meet young people from all over Georgia who have participated in Democracy Schools of EECMD, who think about the future of their own country, reforms and development processes.  The Netherland Embassy in Georgia has a vast portfolio in supporting civil society and organizations.  We try to promote human rights, gender equality and LGBTQI+ freedom. Therefore, we are glad to provide support for EECMD and other organizations that do crucial work in creating a vibrant civil society environment.”,- said Ambassador of the Kingdom of the Netherlands in Georgia

The Democracy School project was launched in Telavi in Autumn 2011. After the successful completion of the project, the geographic area of the program has been expanded. In January 2012, Democracy Schools started functioning in Kutaisi and further extended to Gori and Batumi in the fall of 2012. Since 2015 five cities of Ukraine, Lviv, Odessa, Dnipro, Kyiv, have been added to the list. In 2021, in Moldova, EECMD will open its first Democracy School. Today, Democracy Schools has about eight hundred graduates.

“Democracy Schools is a place where people who share democratic values, meet,  receive qualified information on a variety of topics and to develop the skills that will help them in future political life or active public activities. We believe that the democratic process begins with strong local self-government. That is why we are glad that up to 35 graduates of the Democracy School were running in the local self-government elections this year, “said Nino Khitarishvili, Senior Education Program Officer of the EECMD.

EECMD relied on its and NIMD’s decade-long international experience and the knowledge of international or local experts and practitioners.

Members of the executive board of Eastern European Center for Multiparty Democracy (EECMD) also addressed the audience:

At the initiative of the Eastern European Centre for Multiparty Democracy (EECMD), we celebrated the tenth anniversary of the Democracy Schools with the founding of the Alumni Association.