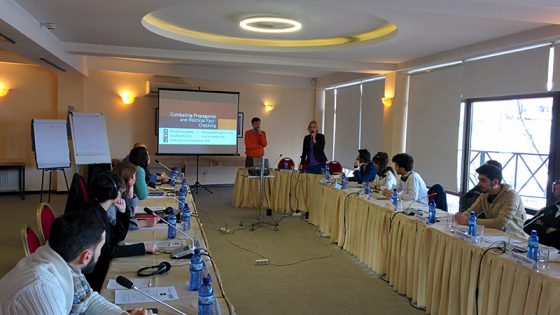 The trainings took place in the framework of the Resilient Democracies project supported by Conflict, Stability and Security Fund of the British Government and aimed at further strengthening capacities of young politicians on the issues of how propaganda is organised, how it affects popular perceptions and how to effectively counter the efforts that are designed to distort and undermine democracy and democratic processes.

The trainings were conducted by representatives of StopFake project which was created in Ukraine in March 2014 with a goal to verify and refute disinformation and propaganda that comes from abroad. Building up on experience of the previous round of trainings, the invited trainers – co-founder of StopFake and Director of Kyiv Mohyla School of Journalism, Yevhen Fedchenko, together with StopFake deputy chief editor and Head of Media Communications Program of Ukrainian Catholic University, Viktoria Romaniuk – provided participants with in-depth analysis of risks and challenges that fake news may pose, and how they can subsequently impact political decision-making processes.

The logical framework of the trainings included both theory and practice. Theoretical part provided an overview of the existing mechanisms of propaganda dissemination, the ways it manipulates political contexts, distorts reality and influences public opinion. Supported with a number of country-specific case studies this overview helped the participants to contextualise the acquired information and to draw analogies of potential threats that they may face in their own countries. Specific emphasis was put on understanding basic and advanced principles of information verification and application of relevant tools in practice. These tools were afterwards successfully tested in groups, where participants, among other things, enhanced their skills in working with visual content, photos and satellite images.

NIMD welcomed the fact that the trainings content and quality received wide approval which was reflected in the feedbacks of young politicians:

Anna Samkharadze (European Georgia): “The training met 100% of my expectations. We understand that propaganda has virtually no borders. Such projects shall take place on a regular basis to allow us keeping up with current trends of fact checking and techniques of combating propaganda.”

Orkhan Hajili (Musavat): “While our parties in Azerbaijan sometimes may have topics of contention between each other, this training showed that we have many opinions in common. Thank you for gathering us around one table.”

Lilik Tarlamazyan (ANC): “I will definitely apply these tools in my work and share this information with others.”