NewsEventsStudy visit to the Kingdom of Netherlands 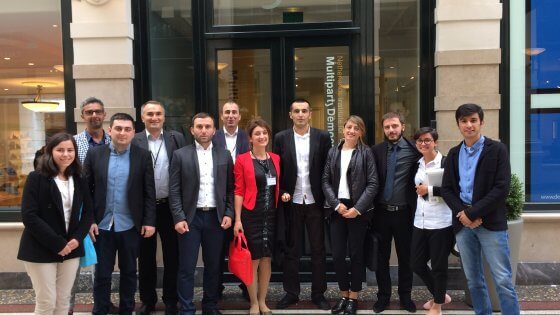 Study visit to the Kingdom of Netherlands

On September 12-16, 2017 the Eastern European Centre for Multiparty Democracy (EECMD), within the framework of the Resilient Democracies Project supported by the Conflict, Stability and Security Fund of the Government of the United Kingdom, organized a study visit to The Hague, Netherlands. The delegation included the select number of representatives of the national minorities as well the group of ethnic Georgians.

The purpose of the study visit was to introduce participants with the existing international frameworks designed to uphold the rights of minorities, acquaint the group with Georgia’s existing international commitments and to increase their awareness regarding the political mechanisms of achieving greater participation in public and political life.

During the study visit, the meetings and discussions were held with various institutions such as the Netherlands Institute for Multiparty Democracy (NIMD), International IDEA, OSCE High Commissioner on National Minorities, International Criminal Court, and Embassy of Georgia to the Kingdom of the Netherlands.

The representatives of NIMD introduced participants with the work that NIMD does around the world, including its approach and programs in different regions. Initially, discussions centered around the NIMD’s experience in facilitating the multiparty dialogues and the peace processes in different parts of the world. Participants also shared their experiences regarding the rights of national minorities in Georgia and their representation in the political parties and state structures.

Meeting with International IDEA focused on the democratic reforms taking place in various countries of Eastern Europe including Ukraine, Moldova and Georgia. Participants of the group, as well as the representatives of International IDEA, touched upon the issues of upcoming municipal elections as well as the general state of self-governance and decentralization in Georgia.

OSCE High Commissioner on National Minorities (OSCE-HCNM) also hosted the delegation and presented to them the information regarding the mandate of the office and the rationale behind the work of the OSCE-HCNM. As the organization works towards ensuring the rights of national minorities are upheld and tensions among them do not develop into the conflict, the participants learned more about the existing frameworks vis-à-vis the protection of the rights of ethnic minorities, and became familiar with the work of OSCE-HCNM in Georgia and elsewhere.

The members of the delegation also met with the Georgian Ambassador to the Kingdom of the Netherlands. The wider theme of the discussions have been the dynamics of Georgian-Dutch relations, the extent of political support that Georgia receives from the Netherlands as well as the aspects of Dutch-Georgian economic relations, specifically in the field of agriculture.

Apart from the official meetings and discussions, participants visited Binnenhof, Dutch Senate and House of Representatives of the Kingdom of the Netherlands. The guide tour organized by the ProDemos introduced the group to the brief history of both parliaments of the Netherlands as well as the mechanisms through which the Dutch political system operates. Additionally, the tour to the International Criminal Court (ICC) equipped participants with an improved knowledge on the work of the court, including its ongoing case which investigates the violations of the Rome Statute during the Russian-Georgian war in 2008.