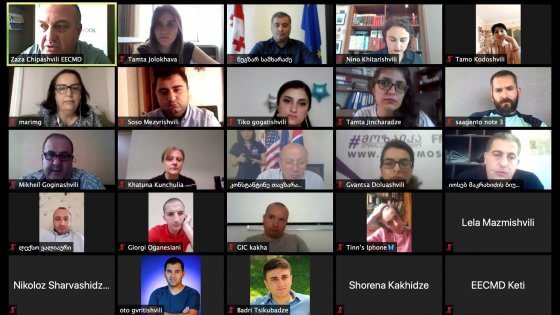 The next phase of the project “DRIVE Democracy: Developing Regional Information and Voter Empowerment for Democracy” is running smoothly and successfully. In five cities of Georgia political dialogue formats have been established and the first meetings were already held in Telavi, Gori, Kutaisi, and Batumi. The next meeting is scheduled in Tbilisi.

With meetings of a given format, the project aims to create a regular platform where participants can engage with their elected representatives in an issue-based dialogue process, discuss the problems that were raised in the roadmaps, and suggest initiatives to address them.

The abovementioned online format was of a representative nature. Meetings were attended by the mayors of the cities involved in the project, chairmen of municipal assemblies, state attorneys, members of the political parties, the representative of the USAID Georgia, invited experts, and of course, project participants.

The first meeting which was held on the 10th of June was hosted by Telavi. Nino Khitarishvili, Senior Program Officer at EECMD briefly introduced the DRIVE project and the activities implemented. Also, Levan Tsutskiridze, the Executive Director of EECMD, addressed the audience and stressed the importance of creating similar dialogue formats with the involvement of various stakeholders.

At this meeting, the members of the DRIVE Democracy Group in Telavi presented their policy proposal and the issues on which they have built the regional development roadmap. In particular, they discussed how to promote economic activity and employment in Telavi Municipality by improving an investment climate and developing innovations. The representatives of legislative and executive branches of the government expressed their readiness to actively engage in drafting the document and to actively cooperate at all stages.

The next task force meeting was held in Kutaisi on June 11, where the project participants introduced the invited local authorities to the issues on which the group has been working. Kutaisi regional development roadmap addresses the problems in the field of early and preschool education, as well as strengthening economic policy and strategic planning of the Kutaisi Municipality. The participants discussed why these topics matter for the municipality and how to work on them in a dialogue format. As a result of the meeting, the acting Chairman of Kutaisi City Council, the First Deputy State Attorney in Imereti, and the chairmen of the factions of the City Council indicated their interest in presented issues and a readiness to cooperate. Moreover, they expressed hope that meetings of a given format will yield concrete results and lead to active discussions of these issues in relevant institutions and commissions of the City Council.

The task force meeting held on June 12 in Gori was also representative. The members of Gori DRIVE Democracy group presented the issues they have been working on within the framework of the regional development roadmaps. Thus, talked about promoting entrepreneurship in Gori Municipality and also, creating “Mediatheka”, a multifunctional space for the development of the local community. They reviewed the situation in the municipality, including the legal nuances, problems identified by the group, and the ultimate goals of their policy paper. The issues presented to the audience turned out to be interesting and timely, based on the parties who expressed their readiness and support for the project progress.

The task force meeting in Batumi with the local authorities was held on June 16, where the members of the DRIVE Democracy group introduced the attendees to the central ideas of their roadmap and the research topic- “Civic involvement for the Protection and Development of the Urban and Cultural Heritage of Batumi”. After the presentation, an interesting discussion was held and the deputies of Sakrebulo factions, specialists of the department of the historical zone development, and participants of the project expressed their opinions on the selected issue.

Thus, the first meetings of a political dialogue format, despite their introductory nature, were quite fruitful and laid the foundation for the new political culture in Georgia- the joint involvement of citizens and elected representatives in discussing political issues and the real needs of the public.

The Eastern European Centre for Multiparty Democracy expresses its full readiness to cooperate with the parties involved in the DRIVE Democracy project and hopes that the vision of the citizens will be put into practice as a result of the agreement between the stakeholders.

In five cities of Georgia political dialogue formats have been established and the first meetings were already held in Telavi, Gori, Kutaisi, and Batumi.