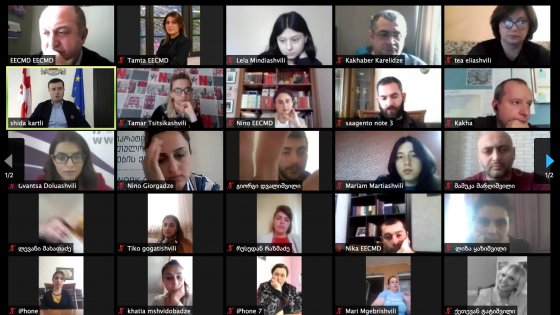 The Eastern European Centre for Multiparty Democracy (EECMD) is hosting online meetings with local government officials in 5 cities of Georgia. The purpose of the meetings is to facilitate communication between the population and the local government. Against a backdrop of the novel Coronavirus and the restrictions imposed, it is of great importance to inform the public about the measures taken against the virus at the municipal level.

To this end, six meetings have already been held in the regions with the participation of different local officials. The project is supported by the Embassy of the Netherlands in Georgia.

On May 1, the first meeting was held with Mr. Irakli Kadagishvili, the State Attorney- Governor in Kakheti Region, who spoke about the work carried out and planned activities in the region. In the beginning, the Ambassador of the Kingdom of the Netherlands to Georgia, Maaike van Koldam and the Executive Director of the EECMD, LevanTsutskiridze addressed the participants and emphasized the importance and necessity of such meetings.

According to the Governor, the administration is actively working on preventive measures. Up to now, there are 3 fever centers and 11 quarantine zones in Kakheti. Also, all entrances to the region are being controlled. As Mr. Kadagishvili said, following the existing state protocols, from the next week the infrastructure projects will be resumed and also, the agricultural works will enter an active phase.

Telavi Democracy School also hosted online Shota Nareklishvili, the Mayor of Telavi Municipality and Guram Matcharashvili, Majoritarian MP of Lagodekhi-Kvareli. Within the framework of the meeting, the participants talked about the activities of the City Hall over the past year, the priorities and works planned for 2020, the challenges related to the epidemiological situation, and, in this regard, the importance of parliamentary activities and timely legislative decisions.

The graduates of Batumi Democracy School had the opportunity to receive information and updates about the epidemiological situation in Adjara from Nino Nizharadze, First Deputy Minister of Health of Adjara and the Mayor of Kobuleti Municipality, Mirian Katamadze, who spoke about the measures taken in 4 villages which were declared as so-called “Red Zone”. He also noted that in parallel with the measures taken, preparations for the tourist season in the region are underway.

The Acting Mayor of Kutaisi Municipality, Davit Eremeishvili reviewed the implementation of social, infrastructural, and economic projects in the city and future plans and also, answered the questions coming from participants.

During the meeting with the alumni of Gori Democracy School, the State Attorney in the Shida Kartli region, Giorgi Khojevanishvili reviewed the epidemiological situation in Shida Kartli and the preventive measures taken in this regard. He also spoke about current and planned socio-economic activities and answered the participants’ questions.

The meetings are attended by the alumni of Democracy Schools and the representatives of local public organizations. The cycle of the above-mentioned meetings has already turned into a tradition.

It is planned to organize the online report meetings with the mayors of different municipalities for the public to have accurate information about the measures taken by the state and individual municipalities against the spread of the novel Coronavirus. Moreover, this platform is another way for the public to share their initiatives, problems, or recommendations with local authorities and jointly discuss ways out of the crisis.