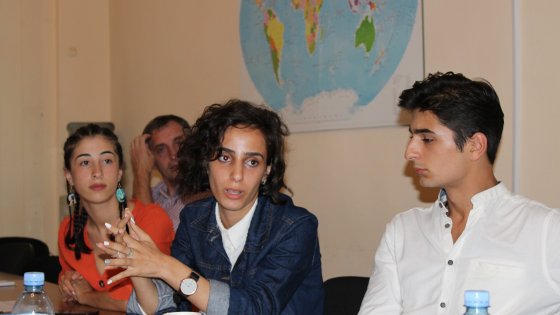 EECMD Democracy Schools in Kutaisi and Batumi have celebrated International Day of Democracy by discussing the challenges of Georgia on the way of European and Euro Atlantic aspirations. The meetings were attended by the school alumni, representatives of civil and political sector, journalists and students.

At the beginning of the meeting, Coordinator of Batumi Democracy School talked about the importance of this day, democracy index and the joint statement made by 40 different organizations from around the globe, including Eastern European Centre for Multiparty Democracy (EECMD). By this statement non-governmental organizations provide 5 major recommendations for EU leadership to preserve and strengthen democracy.

During the first part of the meeting guest speakers have talked about the fundaments of democracy, the necessity of coexistence of democracy and liberalism and the concept of democratic peace. Head of Atlantic Council of Georgia, Mr. Giorgi Muchaidze, highlighted the connection between democratization and external security, especially for such small and developing countries as Georgia.

It is worth mentioning, that the speaker discussed a new possible model for Georgia to become member of NATO without Abkhazia and South Ossetia. In this case, Article 5 will only be imposed in case of violation the territory controlled by Georgian government. This might be applicable for NATO member states who will avoid being engaged in an armed conflict with Russia from one hand and for Russia itself from another, as Putin might veto that kind of decision. Mr. Muchaidze declared, that ‘such model will create an opportunity for Georgia to keep on developing, to avoid losing new territories and to create a perspective for getting occupied regions back, as it happened in case of Germany. Besides, NATO membership will stimulate investments and Georgian economy.

Second part of the meetings were mostly interactive. Discussions were concentrated on such issues as the role of civil society in democratic transformation process, interconnection between democratic governance and economic growth, situation in the occupied regions, EU observation missions etc.

International Day of Democracy is being celebrated on September 15 by the UN since 2008, giving possibility to enhance democratic values, talk openly about the challenges of democratization and find the solutions to those problems, respectively.

EECMD Democracy Schools in Kutaisi and Batumi have celebrated International Day of Democracy by discussing the challenges of Georgia on the way of European and Euro Atlantic aspirations.